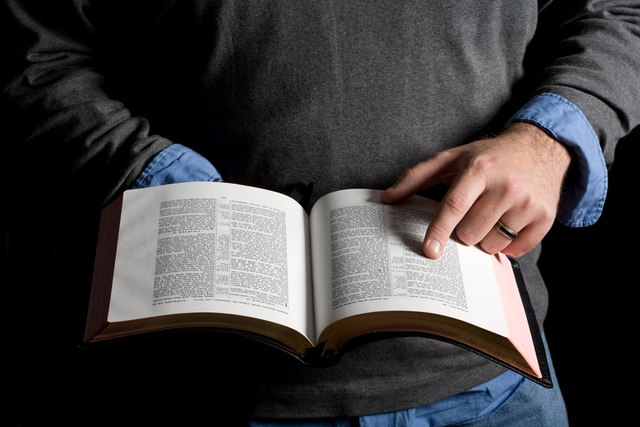 5 Things the Lamanites Got Right 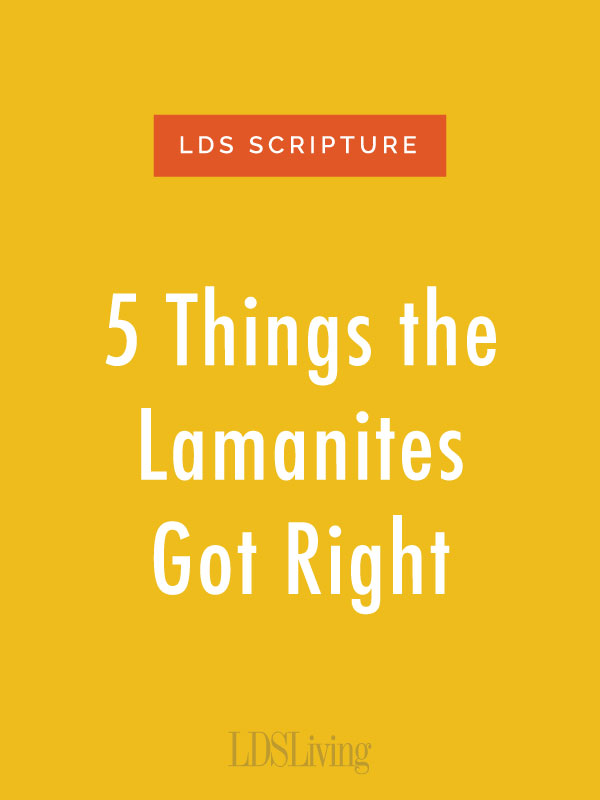 What words come to mind when you think about the Lamanites? If you are anything like me, you probably thought of words like wicked, unrighteous, stiff-necked (whatever that means), or maybe even bloodthirsty. But we forget that even though there are Lamanites in the Book of Mormon that fit this description, there are also many Nephites that fit that description, too. If we look a bit closer, the stereotypes we have given the Lamanites and Nephites may not only be untrue but also unhelpful in our efforts to love our neighbor and “liken the scriptures to ourselves.”

President Thomas S. Monson taught us that charity is “accepting weaknesses and shortcomings. It is accepting people as they truly are. It is looking beyond physical appearances to attributes that will not dim through time. It is resisting the impulse to categorize others” (“Charity Never Faileth,” Ensign 2010).

In my mind, the Lamanites represent “others” or those who may be outside of our faith, family, or different from us in some way. But if we take time to look beyond their appearances and study some of the good things the “Lamanites” did in the Book of Mormon, we might be surprised at what we can learn from them. I know I appreciate when individuals take the time to get to know me instead of forming their views based on one or two of my qualities or the actions of my family members (thank you Laman and Lemuel).

With this in mind, let’s take a look at some of the good characteristics of the Lamanite people.

In Jacob 2, the prophet Jacob is grieved when he witnesses how many of the Nephite men had “broken the hearts of your tender wives, and lost the confidence of your children, because of your bad examples before them” (Jacob 2:35). From this lament, we learn that many of the Nephites at this time were unfaithful and acted in ways that destroyed their families. Jacob used the righteous example of the Lamanites as he taught:

“And now, this commandment they observe to keep; wherefore, because of this observance, in keeping this commandment, the Lord God will not destroy them, but will be merciful unto them; and one day they shall become a blessed people.

What does this teach us? The Lamanites loved their families and treated them with respect. Likewise all of us are here on this earth to support each other as we learn from the experiences of mortality and prepare to live eternally with our families. Show your children and spouse that you love them. Have family home evening and family council. Study the scriptures together. When you follow the example of these righteous Lamanites, your family will become stronger and your faith and love will increase.

The righteous Lamanites had incredible faith.

As a missionary, I was inspired by the faith of great Nephite messengers who journeyed into “enemy” Lamanite lands to share the gospel. Over the years, however, I have begun to appreciate the tremendous faith shown by those who accept the gospel.

One of the most obvious examples is the Lamanite queen in Alma 19. Ammon taught the Lamanite king, Lamoni, about the plan of salvation. King Lamoni, recognizing his sins, fell to the earth for two days as he pleaded for the Lord’s mercy. His servants thought he was dead and were preparing to bury him, but the queen called for Ammon. Despite growing up without the same traditional belief in or knowledge of God as the Nephites, she believed Ammon was a prophet who could “do many mighty works in his name.” Ammon comments on her miraculous faith in Alma 19:10, which states, “And Ammon said unto her: Blessed art thou because of thy exceeding faith; I say unto thee, woman, there has not been such great faith among all the people of the Nephites.”

Because of the Lamanite queen’s faith, her husband was revived and helped introduce his own father, the king over all the Lamanites, to the gospel. Following King Lamoni’s conversion, Ammon’s brother Aaron taught the king about the Atonement of Jesus Christ. In return, the king granted Ammon and his brethren safe passage throughout his lands to teach his people. In Alma 23, we learn that “thousands were brought to the knowledge of the Lord” and “as many of the Lamanites as believed in their preaching, and were converted unto the Lord, never did fall away.”

The faith required of the Lamanites to embrace the teachings of their enemies was tremendous. What an inspiring example of how faith can help us overcome incredible opposition in our lives.

Once converted, the Lamanites did not waver.

Once converted, this nation of Lamanite disciples called themselves the Anti-Nephi-Lehies. When they learned that the Amalekites and the Amulonites (Nephite dissenters) had stirred up their Lamanite brethren to war against them because of their new faith, they remained steadfast to their covenants.

These Lamanites valued the Atonement of Jesus Christ and were so grateful that their sins had been forgiven that they risked their lives as opposed to breaking their covenant. We learn that a thousand Anti-Nephi-Lehies were slain by their brethren before the Lamanite attackers “threw down their weapons of war” (Alma 24:25), ashamed as they watched the Anti-Nephi-Lehies praying to God and giving thanks while they were being murdered. Because of the example of the converted Lamanites, more than a thousand of their Lamanite brothers and sisters were brought to the knowledge of the truth and joined Anti-Nephi-Lehies.

We see another example of their conversion a little later in the Book of Mormon. A few years before the Savior’s visit to the Americas, the people were “lifted up unto pride and boastings because of their exceedingly great riches, yea, even unto great persecutions” (3 Nephi 6:10). Much like today, there was great “inequality” in the land, and everyone was divided according to their “riches and their chances for learning” (3 Nephi 6:12).

But despite persecutions, the Lamanites were the ones who “were converted unto the true faith; and they would not depart from it, for they were firm, and steadfast, and immovable, willing with all diligence to keep the commandments of the Lord” (3 Nephi 6:14).

What a wonderful example of conversion! Once the Lamanites embraced the gospel they dedicated their lives to keeping the commandments and would not depart from it.

To achieve exaltation, each of us must become truly converted. The Lamanites provide an amazing example of how to remain steadfast in our covenants in the face of adversity. Much like today, the Lamanites faced opposition from individuals in their communities, members of their own church, and others in the world who fought against righteousness. And while we may not face death for our beliefs, we often face other persecution or criticism that we can respond to the same way the converted Lamanites did: with faith and patience.

We know that the Nephite prophets and kings recorded their history and revelations on gold plates that were abridged by Mormon and eventually translated by Joseph Smith into the Book of Mormon. But were the Nephites the only ones who kept records?

In Mosiah 24, we learn that King Laman instructed Amulon and his brethren to teach the Lamanites the language of Nephi. The Lamanites were described at that time as “a people friendly one with another; nevertheless they knew not God.” Amulon taught the Lamanites that “they should keep their record, and that they might write one to another” (Mosiah 24:6).

Additionally, in Helaman 3, we learn that “there are many books and many records of every kind, and they have been kept chiefly by the Nephites” and that “a hundredth part of the proceedings of this people, yea, the account of the Lamanites and of the Nephites, cannot be contained in this work.”

The records were chiefly kept by the Nephites but not exclusively kept. If we were to read the Lamanite records what would we learn? Perhaps we would learn how precious the gospel truly is in our lives. The Lamanite people offer a very unique perspective. Many of them grew up outside of the church and then accepted the gospel later in their lives. Experiencing this contrast likely contributed to their dedicated pursuit of a Christ-centered life.

There were Lamanite prophets.

One of the most anticipated events our world ever knew was the birth of Jesus Christ. Who did the Lord call to prophecy of his impending arrival in the Americas? Samuel, a Lamanite by descent. In Helaman 14, Samuel prophesied that there would be “great lights in heaven” and “a new star arise” along with “many signs and wonders in heaven” that “ye shall all be amazed, and wonder, insomuch that ye shall fall to the earth.” He also revealed the signs that would occur at Christ’s death. Samuel declared “the sun shall be darkened and refuse to give his light unto for the space of three days.”

Samuel told the Nephites: “And now, because I am a Lamanite, and have spoken unto you the words which the Lord hath commanded me, and because it was hard against you, ye are angry with me and do seek to destroy me, and have cast me out from among you” (Helaman 14:10). In other words, because Samuel was a Lamanite, or not part of the “chosen” people, the Nephites ignored his teachings. What are we to learn from this?

I believe that the Lord is teaching us an important truth. All of us can be instruments in His hands regardless of our ethnicities, genders, ages, or nationalities. Judging others prevents us from seeing our brothers and sisters as they truly are, sons and daughters of God, and causes us to miss seeing truth and righteousness.

Do You Want to Be a Lamanite?

Each time I read the Book of Mormon and consider the story of the Lamanites, I see how the Lord is merciful and willing to extend His loving hand to those who are trying their best to live the gospel. This gives me hope that the Lord recognizes my efforts and that each of His children are precious. My hope is that we can look past appearances, stereotypes, and labels, recognize the beauty within, and become true disciples of Jesus Christ.

Read about the Lamanite’s previously untold story during the momentous events surrounding the birth of Christ in Cameron Staley’s In the Hands of the Gadiantons, available at Deseret Book.

Cameron Staley’s background as a clinical psychologist and love for the Book of Mormon led him to write the unique and often misunderstood legacy of the Lamanite nation.