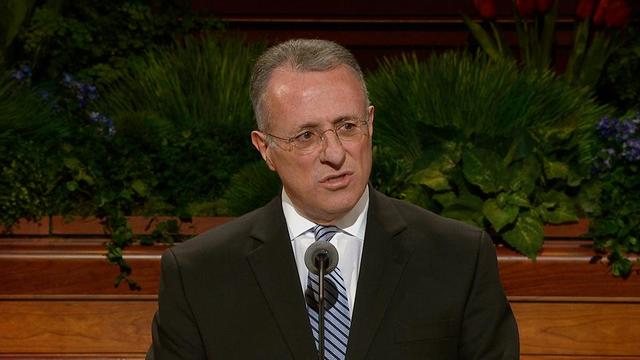 5 Things You Should Know About Our New Apostle Elder Soares

This morning's solemn assembly was a historic occasion and marked the calling of two new apostles, including Elder Ulisses Soares, who was a member of the Presidency of the Seventy. Here are a few things to know about him.

1. He is the first Latin American apostle.

Ulisses Soares was born in São Paulo, Brazil, on October 2, 1958, to Apparecido and Mercedes Carecho Soares.

He holds a Bachelor of Arts degree in accounting and economics and a Master of Business Administration. All of his degrees were received at the São Paulo Pontifical Catholic University, School of Economic Science. He was an accountant and auditor for multinational corporations in Brazil and the director for temporal affairs in the Church area offices in São Paulo, Brazil.

2. His family converted to the Church when he was young.

Elder Soares's aunt sent missionaries to his family in Brazil in 1963. When his parents started attending branch services, they met on the upper floor of a bakery. Elder Soares shared with the Church News that he remembered the warmth of the members mingled with the smell of fresh bread baking. It took only a few months before his parents were baptized, and Elder Soares followed when he turned 8.

3.  He served in the Brazil Rio de Janeiro Mission and was later the president of the Portugal Porto Mission.

Prior to serving as president of the Portugal Porto Mission, Ulisses Soares was called as the first president of the São Paulo Brazil Cotia Stake, among other assignments and callings. He was serving on a special assignment for the Presiding Bishopric prior to his calling to the Quorum of the Twelve Apostles this morning.

His most recent talk in general conference, "Confide in God Unwaveringly," told the story of the people of Limhi, and he concluded with his testimony: "I testify that God is real. He lives. He loves us. He listens to our prayers in our moments of happiness and in our moments of doubt, sadness, and desperation. I testify that Jesus Christ is the Savior of the world. He is the Redeemer."

5. He and his wife, Rosana, met while they were missionaries in Brazil.

Rosana was invited to attend the LDS Church when she was 9 years old, and though her parents allowed her attendance, they would not allow her to be baptized until she was 17. She and Elder Soares met while both serving in the Brazil Rio de Janeiro mission—she was a traveling trainer at the time. Though he was engaged when she came home, after they met again at a dance, he knew his current engagement was not right. He and Rosana were married two years later in the São Paulo Brazil Temple on October 30, 1982, and after many difficulties and losses, they were blessed to raise three children.