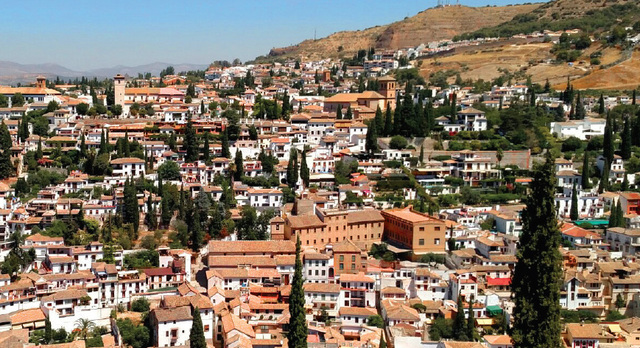 5 Things to Know About the LDS Church in Spain

The cities of Spain have vivid histories filled with battling cultures, religious artwork, and impressive ruins covered in vines and sand. And while countless visitors come to experience Spain’s rich treasures and heritage, Church members in Spain know that their real treasures are the blessings of the gospel and that their true heritage comes from a divine source. Here are five things to know about the Church in this country.

1. Spain was not dedicated for the preaching of the gospel until 1969.

Despite the Church’s early growth in neighboring European countries, it wasn’t until the mid-1960s that the gospel began to take root among the Spanish people. During that time, Jose Maria Oliveira became interested in the Church after he began dating Patricia Wright Graff, an American LDS woman living in Madrid with her brother. They attended church together with the servicemen there, and in 1966, he was baptized. They married and began to share the gospel with their friends and neighbors.

"My father, [Juan Ventura], was the first convert in Spain in the modern era," says Peter Ventura. "He was baptized in 1952, having been converted by American sailors in Barcelona, Spain. He went to Marseilles, France, for the baptism. Because he was beaten and imprisoned for his membership in the Church in early 1954 he fled Spain to France."

Ventura continues, detailing his father's faith and membership in the Church: "He was called to be the first member branch president in Spain in 1973. Later, in Spain, he served as a counselor to three mission presidents and was the first Spanish sealer called from Spain."

“Jose Maria became [one of] the first Spanish member to remain in Spain,” says Lloyd Brimhall, a member in Arizona who lived in Spain during the early 1970s. “He played an important role in helping bring the Church to the Spanish people.”

Angel Herrero was another of the very first converts in Spain—becoming a member even before missionaries arrived in the country. “In those days, the Church was very small—unknown and unable to reach the community,” Herrero says. “We had permission from the government to meet, but we were not [legally recognized] until 1967.”

After the Church received official recognition from the Spanish government, Elder Marion G. Romney dedicated Spain for the preaching of the gospel in May of 1969. Missionaries arrived three weeks after that, and the first mission was created in 1970. In 1982, the first stake in Madrid was formed, and Jose Maria Oliveira was called to serve as the stake president. Ten years later, President Gordon B. Hinckley visited King Juan Carlos I and Queen Sofia of Spain and presented them with a Book of Mormon. Today there are three missions in the country, more than 140 congregations, and one very busy temple.

Early members like Oliveira and Herrero paved the way for another generation of Latter-day Saints in Spain by teaching their children faith and humility.

“I am a second-generation member—both my parents are converts—and I have been very lucky to grow up in a strong ward, mostly formed by pioneers of the Church here in Spain,” says Carolina Benito, who grew up in the Alcalá Ward in the Madrid East Stake. “I have always loved hearing their conversion stories. They value very much the light of the gospel and the Book of Mormon. Those feelings, through their examples and efforts to simply live the gospel, have been passed on to many of us.” 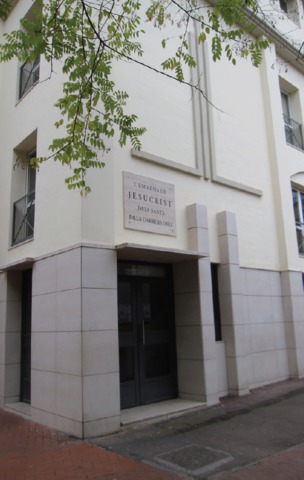 2. Over the past 50 years, the gospel has become more accepted by the incoming immigrants from other Spanish-speaking countries than by Spanish natives.

“We like to say that we have a mini United Nations in our ward, with 21 different nationalities that manage to function, share, teach, and grow together,” says Benito.

“I met people from 64 different countries while in Spain,” says Geneil Perkins, who returned from a mission in Barcelona. Having so many members from various countries has significantly strengthened the stakes of Zion in this part of the world.

Many ward activities in Spain involve showcasing food, music, and traditions from many other Latin countries—Guatemala, Mexico, Peru, Ecuador, and Argentina, just to name a few. “It helps bring all different nationalities together under the same [reasons]: celebrating family and friendships, eating tasty food, and having a good time hearing poems and presentations and dancing together,” says Benito.

“We need the differences,” says Nazaret Pardo, who was raised in Spain and currently attends LDS Business College in Utah. “I grew up having friends from all over, and because of that, I am able to understand and love them more personally.”

3. LDS youth are key to missionary work in Spain.

Because of Spain’s traditionally Catholic faith, it can be a challenge for Spaniards to accept the restored gospel. But missionaries have a secret weapon up their sleeves: the LDS youth! These brave young members aren’t afraid to live their standards for all to see. And they do it in spite of serious worldly pressures. “The young men and young women sacrifice a lot,” says Jordan Stone, who served in a Young Men presidency in Granada. “In Spain, it is very popular to party on Saturday night from about midnight until Sunday morning. They do that every weekend. The kids have decisions to make: they either go out and party and miss church, or they don’t party and come to church.” 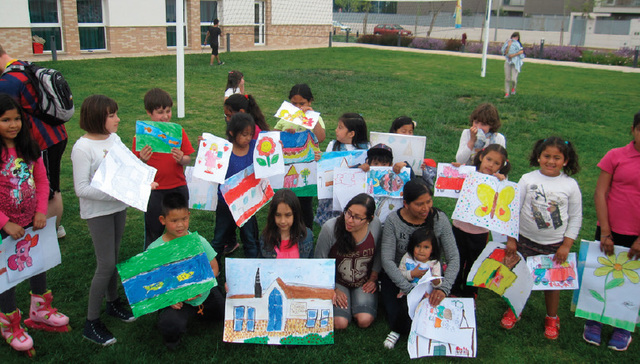 These youth are not only living their standards but sharing their beliefs with those around them. “The youth and YSA participate in family home evenings with the missionaries and their investigators. They also come along with missionaries for their appointments,” Benito says. “The youth are key in inviting their nonmember friends to join them in everything they do. It comes naturally.”

In addition to the youth’s efforts, adult members are also doing their best to spread the gospel. Mari Carmen Giron, a convert from Jerez de la Frontera who now lives in Navalcarnero, arranges for the sister missionaries to teach piano lessons to her daughter and her nonmember neighbors as a way to introduce them. She also sets up a booth at her local market to sell goods and invites the missionaries to hand out pamphlets at the same time.

“Members don’t seem deterred by people refusing their invitations,” says Monica Dickinson, who worked with Giron during her mission. “They keep trying because they really love the gospel and want to share it. They have hearts of gold and so much enthusiasm for spreading the gospel.”

“They are bold—they share the gospel with everyone without fear,” Perkins says. “They understand that the gospel is a blessing in their lives, and they want to share it with everyone.” 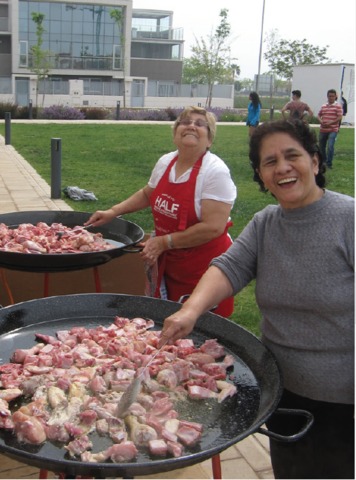 4. Paying tithing, keeping the Sabbath day holy, and attending the temple are among the biggest sacrifices the Saints in Spain make in order to live the gospel.

Members in Spain cheerfully sacrifice often for the Lord. With a conviction that “sacrifice brings forth the blessings of heaven,” they choose to give up worldly advantages in exchange for godly ones.

“Most sacrifices are the little day-to-day things,” says Benito, like “making sure they get up on time to catch the bus to church, helping others who couldn’t otherwise get to church, serving as temple workers, or simply making time to go to the temple on a regular basis.” Paying tithing can be especially difficult for many immigrants who are working to send money to help support their families. 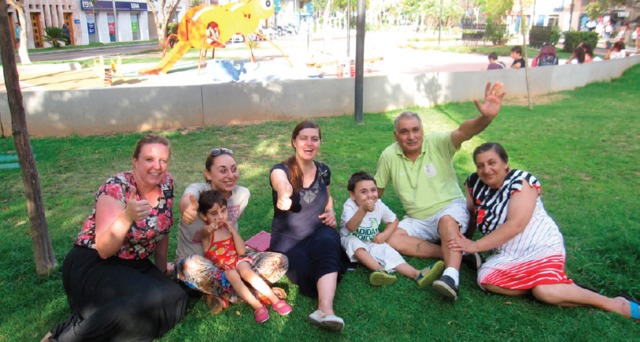 Dedicating their Sundays to the Lord has also proven to be a very large sacrifice for the members in Spain. “It can be very hard to find a job that doesn’t make you work on Sundays,” says Craig Martineau, who served in the Spain Málaga Mission from 2007 to 2009. “This is especially true because of the bad economy. So passing up on a job because it requires working on Sunday is a big sacrifice.”

Giron and her husband, Roger Bascope, are an example of this. She serves as the secretary in the Relief Society and her husband is the first counselor in the bishopric. But one year ago, Bascope was offered a more lucrative job—one that would have required him to work on Sundays.

“Since we would not have been able to enjoy Sunday meetings together as a family, we decided it was better to lose that job opportunity than to lose the blessings of attending church,” Giron says. “After we made that decision, my husband was offered a better job that allowed him to have the whole weekend off.”

Members in Spain sacrifice much just to get to the temple in Madrid, which was dedicated in 1999. “The temple was a big blessing for us,” Herrero says.

“In Madrid, balancing family life and work life is very complicated,” Giron says. “Long commutes and working to support our [families] make it so that we are only able to enjoy being together as a family just a few hours every day. We like to go to the temple because it is time that we can spend together as a family in a place where we can feel close to our Heavenly Father.” 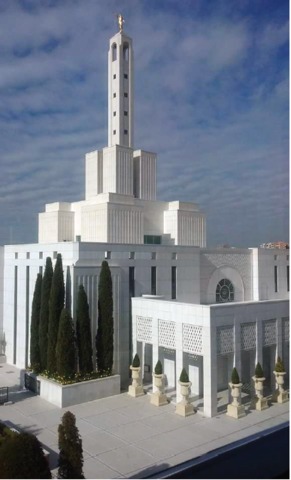 As is common in many countries, sometimes temple trips are arranged to extend over an entire weekend. Other times members hop on a bus after a busy day at work and travel all night to arrive at the temple early Saturday morning. They perform ordinances for the dead all day only to get back on the bus and drive through the night to be back in town for church on Sunday. “It is especially amazing when the following Sunday is fast and testimony meeting, because all of the members get up and share about the incredible spirit of the temple,” says Perkins.

Pardo grew up going to the temple with her family, even when her mother, Isabel, began to struggle with cancer. On one weekend trip, Pardo noticed that her mother was not doing well. Her legs had swollen and she seemed worn out. Pardo suggested that she rest in the hotel instead of going to the temple. But Pardo’s mother wouldn’t hear of it. “I asked her to rest, and she told me: ‘Nazaret, I can always have time to rest. But being in the temple with you? No.’”

5. The Saints in Spain have an especially deep love for the scriptures.

That tenacious spirit with which members cling to the temple also helps them cling to one of their other favorite blessings: the scriptures.

“In my family, we read the scriptures every single day,” Benito says. “I was happy to see my parents reading as a couple every night.”

In Spain, tattered and worn scriptures are not a sign of neglect—they are a sign of love.

This love extends to everything that they do and everyone they interact with. Whether they’re studying the scriptures on Sundays or putting on cultural talent shows, these members do everything with charity. “The love that they have for everyone is incomparable,” Perkins says.

“They really love and support each other in their efforts to live the gospel. And when they gather at conferences, it feels like a family reunion. They’re greeting each other warmly with besitos and big hugs,” says Dickinson.

“They welcome everyone into the ward with open arms and big smiles,” Perkins says. “The wards are more than just wards—they are families.”

Find other interesting stories like "A Kidnapped Boy’s Miraculous Journey Home," "Sacred Walls," "God Gifted Me My Race," and more within the January/February 2017 copy of LDS Living Magazine. LDS Living complements your lifestyle, bringing you a values-based perspective and great ideas for enjoying life. Available at Deseret Book stores or on deseretbook.com