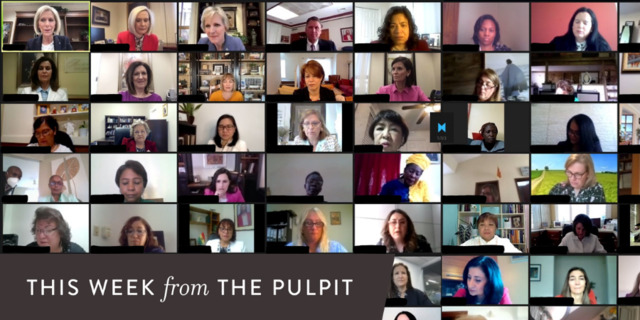 50 female international area organization advisers meet for the first time, social posts you may have missed during conference

Editor’s note: “This week from the pulpit” highlights recent messages by General Authorities and General Officers of the Church.

General conference weekend is always full of inspiring messages. But did you know that after general conference many Church leaders share social media posts about their talks? And some of their posts this week have also shared conference stories you may not have heard.

Young Women General President Bonnie H. Cordon wrote on Facebook, “It was truly a historic day! Sitting in my chair, watching each cherished face appear on screen as we gathered for a worldwide meeting—from Japan to Johannesburg, from Spain to Sao Paulo, and me right here in the United States—I couldn’t help but think back to the very first Relief Society meeting held by Emma Smith, Eliza R. Snow, and their small group of faithful sisters. Look how far we’ve come!”

► You may also like: The Primary General Presidency was released. Here are just 7 changes that impacted children during their service

Sister Michelle D. Craig also shared what her meeting with President Dallin H. Oaks was like when he called her to the Young Women General Presidency three years ago and she reflected on the two questions he asked her.

Below are other posts from Church leaders during general conference weekend.

► You may also like: A promise or invitation from each April 2021 general conference talk