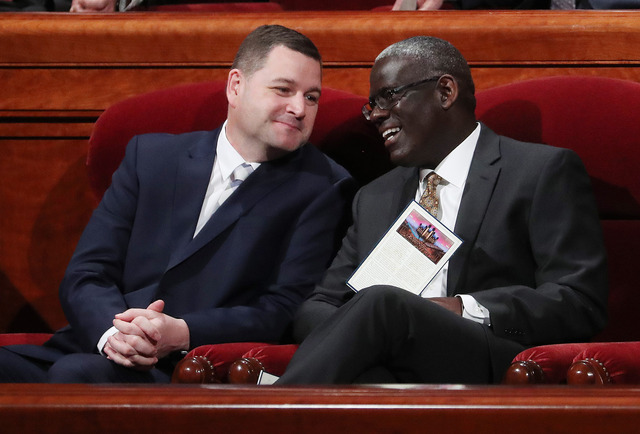 Elder Peter M. Johnson of the Seventy made history in 2019 when he was called as the first African American General Authority. He spoke at October 2019 general conference and titled his remarks, “Power to Overcome the Adversary.”

Elder Ricardo P. Giménez was called to the First Quorum of the Seventy in April 2019 general conference. On the day of his call, the native Chilean rejoiced when a temple was announced in his place of birth, Antofagasta, Chile, according to Church News.

Matthew O. Richardson currently serves as the advancement vice president at Brigham Young University. He has also served as the second counselor in the Sunday School general presidency. In October 2011 general conference, he spoke on “Teaching after the Manner of the Spirit.” Brother Richardson's name will likely be recognized by the many BYU alumni who took his Marriage and Family Relations class.

Dana C. Wiest currently serves on the Primary General Board. She served a full-time mission in Oslo, Norway, and has an MPA from Brigham Young University, according to her biography on ChurchofJesusChrist.org. She and her husband, Mark, have four children and one grandchild.

The heavily contested Utah gubernatorial race went down by one candidate last November when Spencer Eccles cited business and family responsibilities for not seeking the full-time office, according to Utah Policy. The Eccles family is well-known in the state of Utah for their philanthropy.

Jeffery R. Morrin currently serves at BYU-Idaho as the university resources vice president. He and his wife, Laura, have six children. In a June 2017 devotional at BYU-Idaho, Morrin spoke about the importance of finishing and enduring.