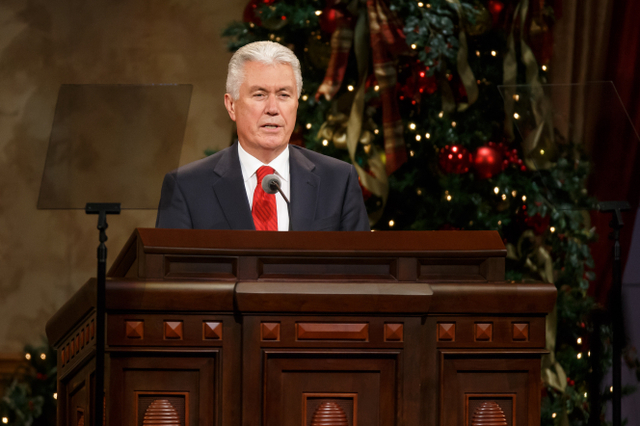 As we remember Christ and His birth, we also reflect on happy times with our family and Christmases where we felt His love strongly. We all have our special Christmas memories, and members of the First Presidency and Quorum of the Twelve are no exception. Here are some Christmas memories from their youth that general authorities have shared over the years.

When President Monson was a child, he played the part of one of the three wise men in a nativity reenactment in his ward. In the play, he declared that the wise men had seen the star and wanted to know where Jesus was.

According to lds.org, President Monson shared:

“I don’t recall all of the words in that pageant, but I vividly remember the feelings of my heart as the three of us ‘wise men’ looked upward and saw the star, journeyed across the stage, found Mary with the young child Jesus, then fell down and worshipped Him and opened our treasures and presented gifts: gold, frankincense, and myrrh,” he said.

To this day, President Monson keeps the old cane he used in the play to remind him of what he felt that day. “The Christmas cane continues to occupy its special place in my home; and in my heart is a commitment to Christ."

When President Eyring was young, he would hear various Christmas songs on the radio, some of which still linger in his mind. One line of a song he remembers the best is “I’ll be home for Christmas, if only in my dreams.” The song spoke of a desire to be with family, but he knew its true meaning went beyond that.

In a 2009 First Presidency Christmas message, he recalled visiting his old home

“A few years ago I went back and knocked on the door [of an old home]. Strangers answered. They allowed me to step into the rooms where the radio had been and where our family had gathered around the Christmas tree. I realized then that the desire of my heart was not about being in a house. It was about being with my family, and it was a desire to feel enveloped in the love and the Light of Christ, even more than our little family had felt in the home of my childhood.”

President Uchtdorf remembers his Christmases as a child vividly. Although his holidays were not extravagant, they were meaningful and special. He remembers the joy his family felt giving and receiving gifts the year he gave his sister a drawing he made and another year when his brother carved a toy knife.

“Isn’t one of the joys of Christmas seeing the excited faces of little children as they take in their hands a wrapped gift that is just for them? This Christmas season and always, I pray that we will see the marvelous gift of the birth of the Son of God through the blessed eyes of a child. I pray that in addition to giving good gifts, we will strive to become good and grateful receivers. As we do so, the spirit of this season will enlarge our hearts and expand our joy beyond measure.”

How did Joseph Smith celebrate Christmas? What did John Taylor say about the pioneers’ first Christmas in the Salt Lake Valley? What was the heartening message that George Albert Smith included on his 1945 Christmas cards? Christmas with the Prophets provides glimpses into the individual Christmas celebrations of each President of the Church, with recurring themes of missionary efforts, Church work, family, and service. Some of the vignettes are personal, others soul-stirring, poignant, and tender. Often their experiences and messages reflect the world conditions at that time and serve as little snapshots of history.