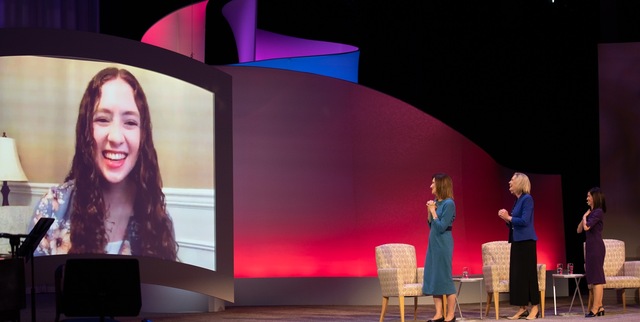 Sunday evening, girls old and young around the globe gathered together to celebrate 150 years of Young Women during a special Face to Face event. The night began with a prayer offered in Norway and ended with a prayer given in front of the construction site of the Bangkok Thailand Temple—appropriate bookends to a night celebrating an organization that has reached women worldwide. But in between the prayers, there were also many inspirational moments.

While the program focused heavily on the incredible ways young women have celebrated the anniversary, there were also remarkable musical numbers, inspiring video segments, and a message from President Russell M. Nelson. Here is a sneak peek of each.

Next year’s youth theme is Doctrine and Covenants 64:33–34, “Wherefore, be not weary in well-doing, for ye are laying the foundation of a great work. And out of small things proceedeth that which is great. Behold, the Lord requireth the heart and a willing mind.” A song written by Nik Day on the topic was recently released, and on Sunday evening, the song was performed by Alora Davis and Ashlyn Peterson with a virtual choir joining in on the chorus.

An animated video illustrated the history of the Young Women organization. Did you know that what would eventually become the Young Women organization was originally called the Young Ladies' Department of the Ladies' Cooperative Retrenchment Association? It was organized by Brigham Young as a result of concern about new influences coming to Utah following the completion of the transcontinental railroad in 1870. These are just two of many fun facts shared in the video below.

President Russell M. Nelson sent a special video message to the Young Women that was played during the program. He reiterated his invitation to enlist in the Lord’s youth battalion to help gather Israel. “If you are wondering how you can help to gather Israel, let me suggest four ways,” President Nelson said. “You can: 1) Live according to the teachings of Jesus Christ. 2) Serve someone in need. 3) Invite someone to receive the gospel and 4) Help to unite families for eternity. My dear young sisters, I love you and I promise that if you will be prayerful about helping to gather Israel, the Lord will inspire you. He will lead you to people who are willing to let God prevail in their lives, whom you are uniquely prepared to help. He will strengthen you to meet your own challenges and fill your life with joy.”

Choosing Not to Sit in Sadness

Faith Murray, a young woman from Washington state, was featured in a special video presentation where she shared the unique challenges associated with having an inflammatory bone condition called Chronic Recurrent Multifocal Osteomyelitis, or CRMO. But Murray has found purpose, fulfillment, and healing through serving others.

“Anybody can do what I’m doing,” Faith explained. “I’m not doing anything grand, I’m just this normal teenage girl who saw the needs of her community. I’m grateful for where I am today, I’m grateful for the pain I went through. And that sounds crazy, but I am grateful for those experiences that I had that have provided connection and friendships that will last me more than pain will.

“And your life can be hard, and it’s okay to realize that it is at first. But there’s a point in time that you can no longer sit in the sadness. There’s a point that you have to look away from your situation and look to the outside. When I’m able to serve other people, that’s when I’m the happiest.”

Toward the end of the program, Davis, Peterson, and Walker were joined by Kenadi Dodds and Josie Killpack, vocalists who had been featured earlier in the program, to sing “Glorious,” the song made popular by David Archuleta in the film Meet the Mormons. In the background, a breathtaking video featuring the BYU Cougarettes was shown.

Lead Image: Faith Murray, a Latter-day Saint from Washington state, virtually participates in the Face to Face event for young women around the world on Sunday, November 15, 2020. The interactive broadcast includes the Church’s Young Women General Presidency as well as local organization leaders, members, and friends of the faith. Intellectual Reserve, Inc.

Young Women Face To FaceYoung Women,Face To Face,
Comments and feedback can be sent to feedback@ldsliving.com