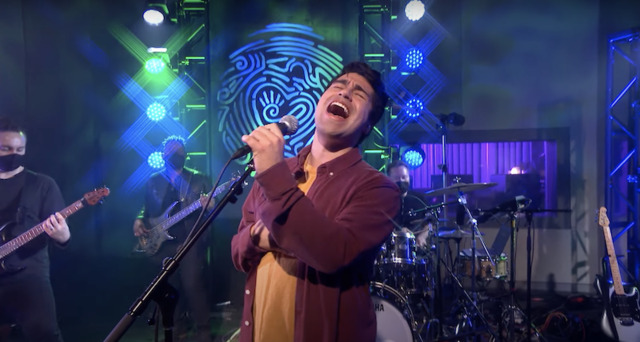 I’m a little picky when it comes to worship music. Now, don’t get me wrong. I can appreciate the hymns and the Tabernacle Choir as much as the next person, but there’s something about a good beat and a catchy melody that I gravitate to. Let’s be honest, though—songs that fit that description and that have inspirational lyrics can sometimes be hard to come by.

But recently, I discovered some songs from the Church’s 2021 youth album, A Great Work, that checked those boxes. I had read about the album before; written and composed by Nik Day, it reached no. 8 in the Christian Music chart on iTunes. The songs were also recorded by youth and young adults in the Church. Previously, though, I never had the chance to listen to it. However, now that I’ve been through the album, I thought I’d highlight some of the songs you might mistake as Top 40 radio hits because they're just that catchy.

There’s a powerful gospel undercurrent in “Your Voice” featuring Yahosh Bonner. Mixed with a unique, contemporary feeling, it will have you singing along in no time. There’s also plenty of variety in this song, building up to a climactic chorus at the conclusion with strong choir backups to match.

A little more on the chill side, “Never That Bad” featuring Aitanta Alapa reminds me of “When I Am Baptized” from the album Shine, which was released just last year. With some scatting, vocal runs, and acoustic guitar, “Never That Bad” has that same relaxed vibe but with a slightly faster tempo. Listening to it provides a quick pick-me-up, making you believe that life really isn’t “as bad as it seems.”

► You may also like: She has worked with Gladys Knight and just recorded an entire album of Primary songs. Here's why the music is unlike anything you've heard before

“If You Believe” (feat. Patch Crowe)

If there was ever a song to get up and dance to when it comes to Church music, “If You Believe” featuring Patch Crowe might just be it. Although the words are in English, the syncopated beat and spoken lyrics bring a little flavor of Latin pop, and the result is fantastic. Mixed with motivational lyrics about moving the highest mountains, crossing the greatest oceans, and walking across the water, this song brings the fun and the inspirational together.

I love the lyrics to “He Reigns,” featuring Yaphet Bustos. The words are focused on Christ—the “Ruler of all that is living,” and the “Master of the seas.” Starting out with electric guitar, a smooth beat on drums, and clear vocals, the chorus builds subtly before culminating to a powerful chorus with a gospel choir singing backup vocals. It’s catchy, upbeat, and is sure to stay in your head—which is a good thing, in my opinion.

There are many elements in “Come to the Well” featuring Elyse Alexander that make this song fun to sing along with and to move to. Starting with a calm verse mixed with snapping and reverb on the vocals, the song also has a driving beat in the chorus with dance-worthy synthesizer.

It’s all about the “Small Things,” sings Leah Campbell. With an upbeat tempo, a catchy chorus, and synthesizer, you wouldn’t guess that the lyrics are all about how the Savior can help us and that miracles can happen. The song is definitely worth a listen.

There are plenty of other songs in A Great Work to listen to with more contemplative melodies and different instrumentation. You can listen to the full album on the Sacred Music app, Spotify, Apple Music and YouTube under the artist “Strive to Be.” It’s also available on Gospel Library under Music. Sheet music, artwork for posters, and T-shirts can be found on youth.ChurchofJesusChrist.org. Language versions of the album will be added as they are available.

You also might want to check out this year’s 2021 Youth Music Festival on March 17. The pre-recorded, livestream virtual concert will feature performances from youth worldwide and will be based on the 2021 youth theme: “Wherefore, be not weary in well-doing, for ye are laying the foundation of a great work. And out of small things proceedeth that which is great. Behold, the Lord requireth the heart and a willing mind” (Doctrine and Covenants 64:33-34).

Learn more about how to watch the 2021 Youth Music Festival here.