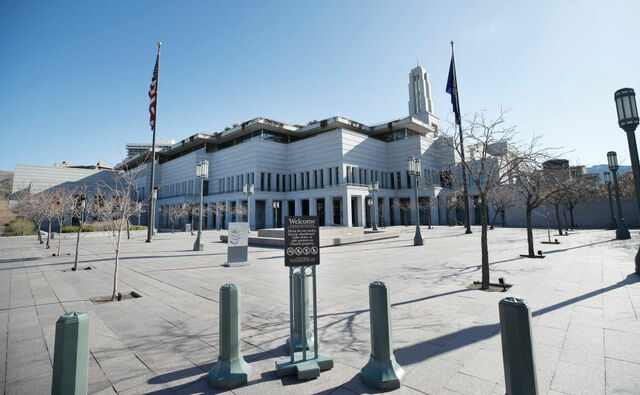 6 years ago I watched general conference for the first time. Here's why it was a life-changing experience

I had searched every corner of the Internet for quizzes and listened to sermons from Christian preachers to figure out what religion I identified with. But up until October 2014, I had completely missed the gold mine that is general conference talks.

My love for general conference began at age 18 almost right after I initially heard about the restored gospel. I started meeting with missionaries in the middle of a beautiful September in Michigan, then found myself on a couch watching a living prophet of God in October.

In October 2014, I knew two things for sure—that President Thomas S. Monson was definitely a prophet of God and that I couldn’t wait to hear what he had to say. 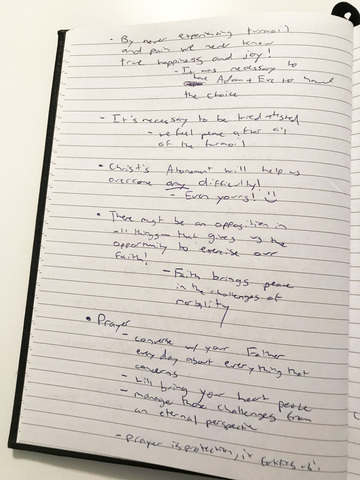 I had only gone to a few lessons with the missionaries at this point, so general conference felt like drinking from a fire hose. I wanted to understand and internalize every word. The pages in my notebook from those sessions are written in a messy half-cursive only I can decipher because my heart and mind and right hand were all trying to keep up with the rapid outpouring of light and truth. I wrote down the timestamps of the sessions, bullet points of everything I wanted to remember, and even drew pictures to illustrate what some speakers said.

► You may also like: 4 hidden gems you may have missed from general conference footnotes

Hearing President Monson’s voice and testimony in particular was thrilling. In fact, it was such a thrill that my notes for his remarks are actually quite brief. I spent those moments just watching him, almost in shock that a living prophet was in front of me on the screen, standing, speaking, and smiling. After one of his talks, I wrote down one poignant question: “Why would I do anything differently when I’ve already found the truth?”

As a convert to the Church, I have watched general conference with friends and on my own. I have watched in dorm rooms, study lounges, apartments, homes, and even at the Conference Center. But no matter where I am, the experience is the same. I love it every time.

I love hearing from the Lord’s chosen servants. We actually get to hear from living prophets, real Apostles, and divinely appointed leaders. For most of my life, I had no idea that this could even be a possibility. It sounds like something out of a fairy tale because it seems almost too good to be true. But it is true.

The Lord has said, “My word shall not pass away, but shall all be fulfilled, whether by mine own voice or by the voice of my servants, it is the same” (D&C 1:38). Hearing from His appointed servants at general conference is like hearing from Him. And I love hearing from Jesus Christ. Sometimes His words take me by surprise while other times His words feel sweet and familiar.

► You may also like: How general conference inspired a Palestinian and a Southern Baptist to join the Church

One of the times His words took me by surprise was during last general conference, when Elder Neil L. Andersen gave the talk “Spiritually Defining Memories.” Elder Andersen’s invitation felt like the Savior of the world was reaching out to me personally and directly. He said:

Embrace your sacred memories. Believe them. Write them down. Share them with your family. Trust that they come to you from your Heavenly Father and His Beloved Son. Let them bring patience to your doubts and understanding to your difficulties. I promise you that as you willingly acknowledge and carefully treasure the spiritually defining events in your life, more and more will come to you.

I followed that invitation, knowing that it was exactly what the Savior would have advised me to do. I began a numbered list in my study journal, then started writing out every moment I could think of where Heavenly Father has made me feel special.

One of the neatest things to me is that the Spirit can help us remember more than we can remember on our own. Christ taught, “But the Comforter, which is the Holy Ghost, whom the Father will send in my name, he shall teach you all things, and bring all things to your remembrance, whatsoever I have said unto you” (John 14:26).

As I sat there remembering moment after moment, I could feel the Lord helping me through the Spirit. During times where I felt stuck and unable to think of anything else, the Spirit would gently prompt me, “What about this?” So, I kept writing and writing. It felt like the Lord and I were writing a story together—our story. My list grew from a few memories to 75 powerful indicators that the Lord has always been mindful of me.

► You may also like: Conference review: 1 powerful promise or invitation from every April 2020 talk

Elder Andersen's promise especially resonated with me because while I have become converted to the gospel, I have also experienced many doubts. Now, those doubts are completely outmatched by all the personal experiences I have had with the Savior and His Atonement. I feel fortified and protected by Him, and doubt has lost its power over me. The Savior has always remembered the sacred moments I have had with Him, but now I remember them too because I followed the counsel of one of His chosen servants.

I have no idea what the Lord will tell us this weekend through His chosen leaders, but I can’t wait to hear what they invite us to do as well as receive the blessings they promise. No matter where you are spiritually, and even if you are watching general conference all by yourself (as I will be doing), there is great reason to rejoice. The Lord speaks to us today.