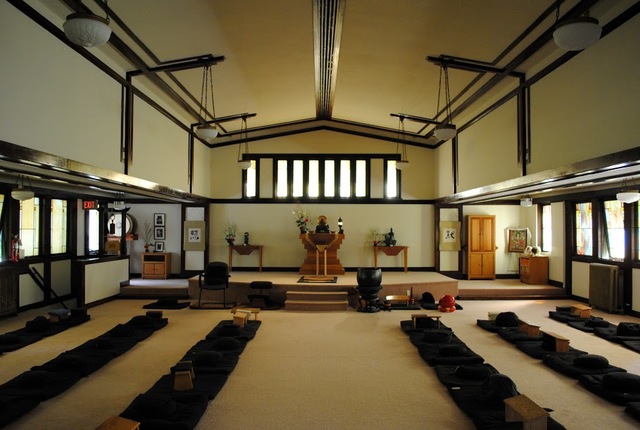 7 Beautifully Unique LDS Chapels (and the Stories Behind Them)

The members of the Columbus Ohio Branch purchased a house and lot in March of 1929 with the intent of building a new meetinghouse. By July, the lot was cleared and the construction of the chapel began, but they had very few provisions to build with.

They found out that the nearby White Cross Hospital was being razed, so members worked on the demolition crew of that building in exchange for stone for their little chapel. It was dedicated in 1930 by President Heber J. Grant, only seven months after construction had begun. For 30 years, this small chapel was a home away from home for numerous students and servicemen stationed in the area. For over 20 years, it held the distinction of being the only chapel built by the Church in the state of Ohio since the Saints left Kirtland in the early 19th century. The building was later sold and is now the St. Sophia Orthodox Cathedral, which provides daily meals to those in need. 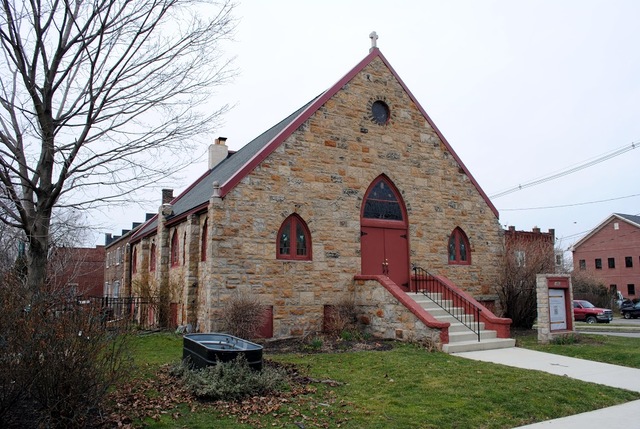 After building a mission home in Portland, Oregon, the Church began constructing a small chapel just adjacent to it. Designed by the prolific architecture firm of Pope and Burton, the building was designed in the popular Prairie Style, inspired by Frank Lloyd Wright. It was completed in 1915 and was dedicated by President Joseph F. Smith, with 450 people present. Rapid growth occurred in the area over the intervening years, with the culmination of a large tabernacle being built in Portland in 1929. As a result, this chapel was eventually sold but has been kept in great condition. As of last year, the building is now used as a Buddhist Monastery called Portland Friends of the Dhamma. 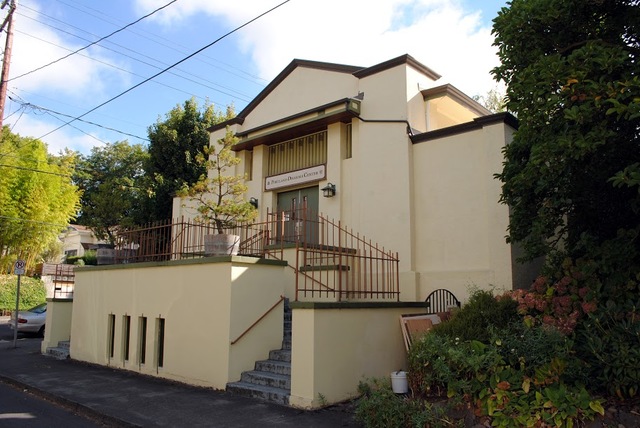 The first LDS chapel in Las Vegas was built during 1924-1925. The small frame building had a stage with a room on each side, plus a main hall, which would seat about 175 people. To create classrooms for Sunday School, curtains were hung on wires from the front door to the stage and from one side of the chapel to the other. The communication was pretty clear in the four classrooms in the main hall—a tall man could look over the curtains and without any strain at all could hear four different Sunday School lessons each Sunday morning!

Once the ward could no longer fit in such a small building, they arranged for it to be sold and moved to a branch in Boulder City, almost 20 miles away. The movers used enormous jacks to lift the building and put square timbers underneath. Then the building was sawn completely in half so it could fit onto the trailers. Re-assembling the building in Boulder City took some time, but it was dedicated at the end of March 1933 by President Heber J. Grant. The meeting was so well attended that all the benches were tightly filled, extra chairs were placed everywhere, and people were standing in the aisles and even hanging out of the windows.

The stage curtains acquired for the building one it was in Boulder City were rather unique. Money had been donated from local businesses to fund the canvas curtain and hardware, so the curtains were full of painted advertisements. Branch members remember advertisements from the Central Fruit Market, The Emporium, and The Green Hut Café.

A new chapel for Boulder City was built during the fall of 1958. The old chapel was then sold to a Protestant denomination, which moved the building back to Las Vegas. Later, it was turned into a shelter for the homeless, and today St. Luke’s Episcopal Church still uses this unique and well-traveled old building. 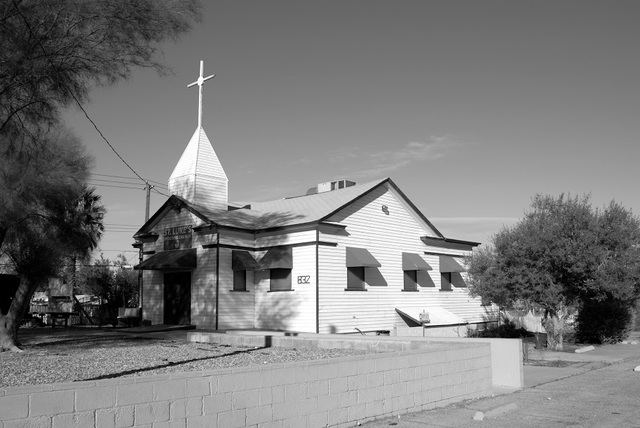 Known lovingly as the "Golden Toaster" to local members due to its unique architectural shape, this meetinghouse, designed by James H. McCrea, was built as the Utah State University Stake Center. It contained two chapels to accommodate four university wards: the USU First, Fifth, Seventh, and Eighth wards. President David O. McKay broke ground for the chapel on May 2, 1961, and it was dedicated a year later. University President Daryl Chase spoke at the event. President David O. Mckay gave the final address and then offered the dedicatory prayer. At the end of the services, a Hosanna anthem was sung, followed by the singing of “The Spirit of God.”

A mid-century masterpiece, this building and its detailing were consistent with the overall form of the building, including often-overlooked items such as the door handles and pews. Sadly the building was demolished this past year as part of a land swap with the university. 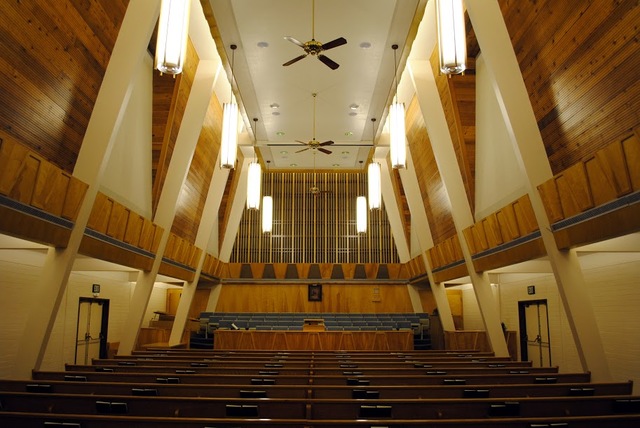 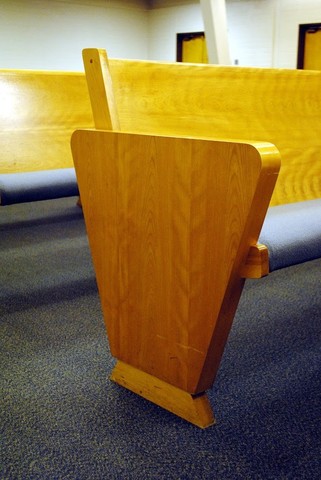 When this unique building was dedicated in 1938, it was one of the largest stake tabernacles in the Church, with a seating capacity of 2,000 people. The architects were Anderson and Young, and the building was constructed when Hugh B. Brown was the Stake President. The detailed woodwork in the chapel is simply stunning, and the chapel is still used today by several wards, including a Japanese branch, in the heart of Salt Lake City. 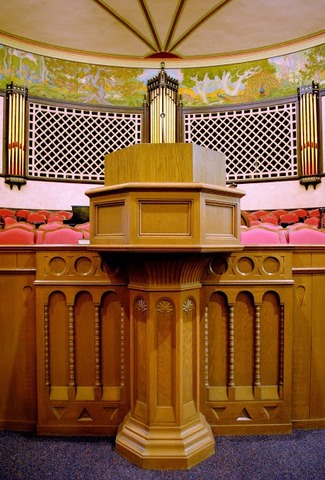 President Heber J. Grant dedicated this beautiful building in front of 1,200 people on April 24, 1932. Thirty years later, there was speculation concerning a city decision to build an East-West freeway through Phoenix, which would have impacted the building. Even though the highway ended up being directly adjacent to the property rather than through it, the ward was relocated to a new building in 1970. Shortly after this, the magnificent facility was sold to The Great Arizona Puppet Theater, which has kept the building in fantastic condition and still continues to use it for daily performances. 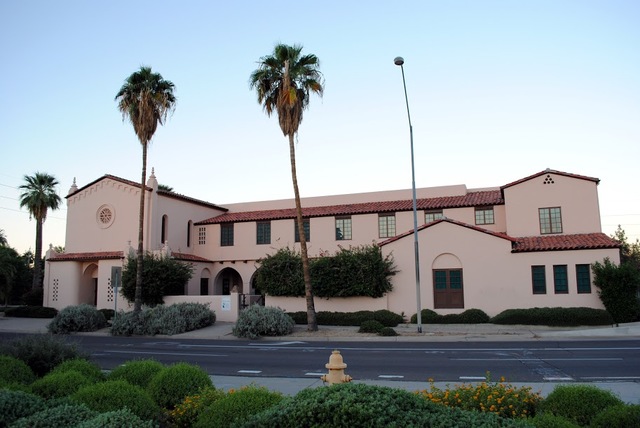 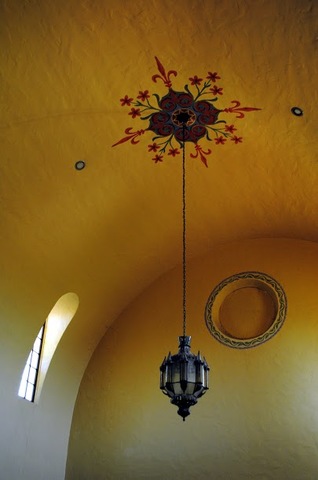 Building an LDS chapel in the nation’s capital was an event of major importance in the Church. There was such great opposition, however, that a group of Protestant ministers tried to dissuade Mrs. Henderson, the landowner, from selling the plot. They predicted that property values would fall and foreign governments would abandon their nearby embassies if a chapel was built. She ignored them, went through with the transaction, and construction moved forward.

The architects, Don Carlos Young, a grandson of Brigham Young, and Ramm Hansen, a Mormon Norwegian immigrant, designed a beautiful building. The exterior of the building is clad in over 16,000 bird’s-eye marble panels that were quarried and shipped from Utah. Other elements, more consistent with a temple than a chapel, included a spire, topped by the figure of the angel Moroni, and stained glass with scenes of the Hill Cumorah, European immigrants, and the Rocky Mountains. All three members of the First Presidency and four members of the Quorum of the Twelve Apostles took part in the dedication in November 1933.

After World War II, many members moved to the suburbs, which led to the building of new chapels. The Washington DC Chapel soon housed a transient ward with lots of singles, and the neighborhood and physical structure of the building itself deteriorated. The porous, travertine-like marble did not hold up well in Washington’s humid climate, and exhaust fumes from automobiles further hastened its disintegration.

The final service was held on August 31, 1975. In September 1977, after the building had stood vacant for two years, it was sold to Reverend Moon’s Unification Church, which still uses the building today. Before the building was turned over, the statue of Moroni was taken down and has been displayed in the Church History Museum in Salt Lake City ever since. 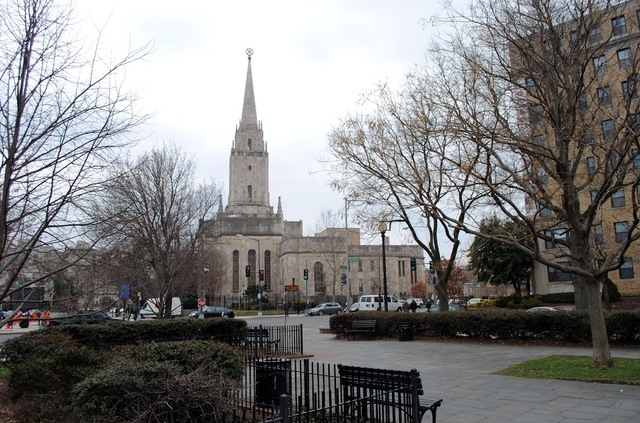 Photos courtesy of Jonathan Kland. See more from Jonathan on his website, ldsarchitecture.wordpress.com.