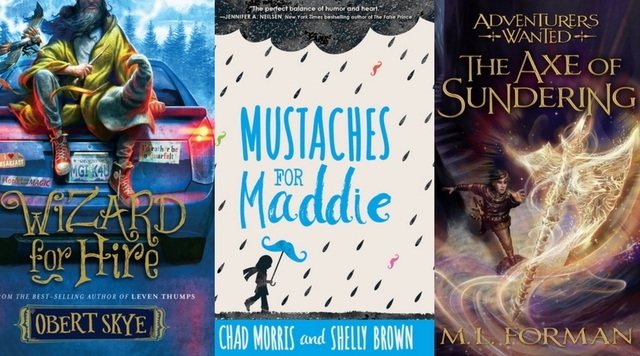 7 Books Your Tween Will Love Reading This Summer

It can be difficult to find books for kids between the ages of 8 and 12. They aren't little anymore, but they aren't old enough to read books written for teens. If this is a struggle your tween has had, here are seven books that are written just for them.

What if there was a wizard in your hometown who offered his services to anyone in need? What if you were scared because your scientist parents had been kidnapped and you couldn't tell the police?

What if you stumbled across a classified ad in your local newspaper that read, "Wizard for Hire. Call 555-SPEL"? Would you call?

Fourteen-year-old Ozzy is desperate to find his parents, but he's not so sure about the ad. He's read about wizards in books like Harry Potter, but they couldn't actually exist in the world today, could they?

Enter Labryinth, aka "Rin," who dresses the part. Sort of. His bathrobe and high-top tennis shoes seem unorthodox. At least Rin acts like a wizard, but Ozzy has his doubts. Do real wizards write notes on their shoes and eat breakfast for every meal? Most of all, Ozzy just wants to know if Rin can cast any magic spells.

With the help of a robotic-talking raven invented by Ozzy's father, a kind and curious girl at school who decides to help Ozzy, and, of course, a self-proclaimed wizard who may or may not have a magical wand, Ozzy begins an unforgettable quest that will lead him closer to the answers he seeks about his missing parents.

Twelve-year-old Maddie has a quirky sense of humor and loves making her classmates laugh by slapping on fake mustaches every chance she gets. Being funny gets her noticed by class queen Cassie, and things are looking up when Maddie is cast as Juliet in the school play. Maybe Juliet could wear a mustache?

When Maddie starts tripping when she walks and her hand starts curling up at her side, her mom takes her to the doctor, who confirms Maddie has a brain tumor. In an instant, her world is turned upside down.

Maddie doesn't want anyone else to know. Especially Cassie, whose jealousy has turned to bullying. What about Maddie's chance to play Juliet opposite the cutest boy in the sixth grade? What if the doctors can't get the ugly tumor monster out of her brain?

As Maddie's surgery approaches, she wonders if her illness is giving her superpowers because her imagination is bigger than ever, her courage is stronger than ever, and her compassion is about to be felt by more people than she ever imagined.

It's time to take the battle to the dragons. In the third and final volume of the bestselling Mysteries of Cove series, Trenton and Kallista—along with their friends, Plucky, Simoni, Angus, and Clyde—fly their mechanical dragons south toward San Francisco, looking to rescue any survivors from the battle of Seattle.

Arriving in San Francisco and investigating the area in secret, the young riders are reunited with Kallista's father, Leo Babbage, who reveals that the humans in the city are working as slaves to the dragons, but that they don't want to be rescued—himself included. He says they are being protected by their new master: a huge, powerful white dragon who lives in an impenetrable tower fortress overlooking the city. Kallista is stunned by the news. Why would her father ever willingly want to work for dragons?

Trenton and his friends are confronted by the guards and their mechanical dragons are seized. Evading capture, the young riders escape and begin looking for a way to break the white dragon's hold over the city—and over Leo. Working with the kids from the city, the young riders track down the source of the dragon's power to an underground chamber that is accessible only through an underwater passageway below the tower fortress.

With the white dragon watching their every move, Trenton and Kallista will need every bit of creativity and ingenuity they can manage to find a way to retrieve their stolen dragons, enter the tower fortress, and take down the dragons once and for all.

After her grampa dies, the last place Libby expects to see him is sitting on the edge of her bed. But that's what happens the night after the funeral.

Even more surprising is that Grampa has three important things to tell her: first, that she isn't alone or forgotten—"The dead ain't never that far from the living," he says; second, that she has "the Sight"—the ability to see family members who have died; and third, that there is something special just for her in the lake. Something that could help her and her father—if she can find it.

Libby and Grampa try to help her father heal from his grief, but it will take all of Libby's courage and her gift of Sight to convince her father that the dead are never truly gone.

Never That Far is set in the lush, rural landscape of central Florida and is a story that celebrates friendship, hope, and the power of family love.

In the long-awaited sequel to Fablehaven, the dragons who have been kept at the dragon sanctuaries no longer consider them safe havens but prisons, and they want their freedom. The dragons are no longer our allies.

In the hidden dragon sanctuary of Wyrmroost, Celebrant the Just, king of the dragons, plots his revenge. He has long seen the sanctuaries as prisons, and he wants nothing more than to overthrow his captors and return the world to the Age of Dragons, when he and his kind ruled and reigned without borders. The time has come to break free and reclaim his power.

No one person is capable of stopping Celebrant and his dragon horde. It will take the gathering of the ancient order of Dragonwatch if there is any chance of saving the world from destruction. In ancient times, Dragonwatch was a group of wizards, enchantresses, dragon slayers, and others who confined the dragons into sanctuaries. But nearly all of the original Dragonwatch members are gone, and so the wizard Agad reaches out to Grandpa Sorenson for help.

As Kendra and Seth confront this new danger, they must draw upon all their skills, talents, and knowledge, as only they have the ability to function together as a powerful dragon tamer. Together they must battle against forces with supernatural powers and breathtaking magical abilities.

How will the epic dragon showdown end? Will dragons overthrow humans and change the world as we know it?

Whalen Vankin is a great an honorable wizard, and he has only ever personally trained two other wizards. One is Alexander Taylor, a young man who has earned a reputation as a brave adventurer, a warrior, and a man of honor. The other is Jabez, Vankin's nephew—a man whose choices have led him down a different, darker path.

Dark magic has covered Westland, and evil is stirring. Whalen and Alex must journey together into the heart of danger, confronting a sea serpent, and facing down more than one dragon. Alex must find the legendary Axe of Sundering—the one weapon that offers a chance to defeat Jabez—and protect the land from the dark wizard's plans. But finding it will be an adventure of its own as the only pathway to the Axe leads through the underground tunnels and secret passages of the Castle of Conmar.

But Jabez has a final weapon at his disposal: the powerful Orion stones, which could spell the end to Whalen and Alex both.

Twelve-year-old Gordy Stitser is one of the few people who knows the truth about the secret society of potion masters, because not only is Gordy's mom on the Board of Ruling Elixirists Worldwide (B.R.E.W.), but she has also been training Gordy in the art of potion-making.

Gordy is a natural, and every day he sneaks down to the basement lab to invent new potions using exotic ingredients like fire ant eggs, porcupine quills, and Bosnian tickling juice.

One afternoon, Gordy receives a mysterious package containing an extremely rare potion known as "The Eternity Elixir." In the right hands, the Elixir continues to protect society. But in the wrong hands, it could destroy the world as we know it.

Now, sinister potion masters are on the hunt to steal the Eternity Elixir. It's up to Gordy, his parents, and his best friends, Max and Adeline, to prevent an all-out potion war.