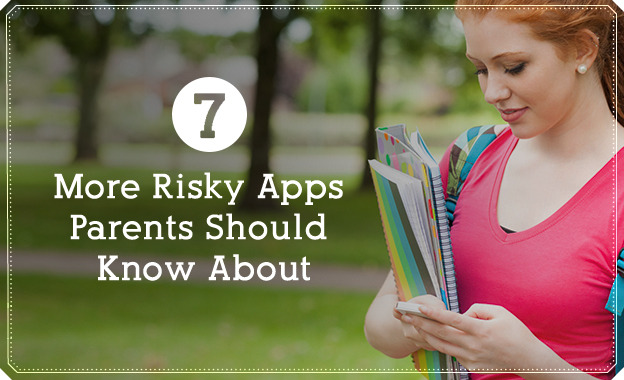 You put filters on your computer, you monitor your child's messages, but sometimes even careful precautions have loopholes.

Even if your child doesn't seek out harmful material online, they can still be exposed unintentionally, especially through mobile apps. Current trends in mobile apps favor anonymous or untraceable messaging and photo swapping. Hashtags make it simple to find sources of inappropriate images and content.

This follow-up to "7 Risky Apps All Parents Should Know About" is meant to help parents by pointing out the dangers in these additional apps that may seem harmless but that each carry risks if misused. Some of these have great potential for spreading good in the world (see Elder Bednar's talk, which praises Pinterest and Instagram), but like all good things, the adversary always tries to find a way for us to misuse them.

From Wikipedia: Pinger's application, Textfree, is a proprietary, cross-platform texting and calling application for smartphones. Users can communicate with others who do not use Textfree via texting and calling. Users can call within US and Canada, while texting is free in 35 countries. New accounts receive a new phone number and 10 free minutes. Users may also communicate with any other user worldwide.

The app highlights “buzz words” in text messages and links them to internet pages. Your child can follow the links to the internet, even if the site would otherwise be blocked. Potentially, they could get access to pornography this way.

2. Clash of Clans (and similar games)

It's a combat strategy game where you can build villages, train soldiers, and battle with other players through the app.

Some games (like this one) have a chat option where other players can send messages to each other anonymously. These chats appear on a different screen than the main game, so children can share or receive inappropriate messages without parents knowing. This chat option is often impossible to disable.

The app's tagline is "Gossip with your best friends without getting caught!"

Besides teaching kids that gossipping is okay as long as you don't get caught, this app is very similar to SnapChat in that it allows you to send private texts, photos, or videos that disappear over time so that what you send or receive can never be traced back to you. This eliminates accountability, is just asking for cyberbullying, and makes it impossible for parents to monitor who children are chatting with and what's being said.

Allows you to "pin" images from internet sites so that you can organize projects and interests, then later follow the image links back to the site where you found them. Users can follow other peoples' Pinterest boards.

While Pinterest's policy doesn't allow pornography and the site (and its app) are generally used for good, it's still not that difficult to find pornographic content there. It's hard to define what's pornographic--figure drawings, bathing suit models, and rated-R movie GIFs can all slip through the cracks. Even the URLs harmless pins point at can lead users to more questionable sites and content. Make sure that your child doesn't have any inapprorpriate "hidden boards" that you can't see when you follow them on the site.

Allows users to send messages and photos that permanently delete after 30 seconds, to make it more like a live conversation. The app's tagline is, "Every spoken word isn't recorded. Why should your texts be?"

Since SnapChat was updated to tighten user security, this app has taken its place in some ways and offers more anonymity and limited security. Messages permanently delete after 30 seconds, and there's no proof of who sent or received a message. Inappropriate messages and photos can be exchanged quickly and anonymously without parents knowing.

This is a dating app where you make a short dating profile that includes a tagline and your most recent Facebook profile pictures. The app finds people around you for you to connect with. If you both indicate that you're interested in meeting the other person, the app allows you to send messages.

If your child is between 13 and 17 years old, Tinder won't allow them to see the profiles of anyone older than 17, and vice versa. However, it's very possible for users to fake their age and target your children, or for your children to fake their age and put themselves in the older age range. After exchanging messages briefly, Tinder users typically swap phone numbers and agree to meet somewhere in person. Take extra precautions before you allow your child to meet anyone through this app.

It's a photo-sharing mobile app where users create a profile and upload photos for others to see. Users can follow other Instagram users and receive updates on their friends through the app and through Facebook and Twitter simultaneously.

The user profiles have the option to include personal information, including first and last name, birthday, e-mail address, and phone number. Anyone can view your photos unless you specify otherwise, and images are often geotagged so that anyone can see where you were when you took the photo. This could lead to predators tracking down your child. Additionally, there are no regulations filtering inappropriate photos, and pornography can easily be found just by clicking on a hashtag that will lead to similar images. There's no way for parents to see what has been seen or searched on the app.

Conclusion (from the original article):

"At the end of the day, there's only so much we can do to protect our youth from risky apps on their mobile devices.

"Don't ban apps just for the sake of banning apps or you may have a revolution on your hands. But be aware of what apps your youth are using, how it's affecting their gospel study time, school time, mutual time, and family time.

"The best way to avoid risky apps or dangerous entertainment is to have a healthy relationship with your youth. Talk to them about the apps they use and advise them to make good decisions when it comes to their activity online."

What precautions do you take when it comes to mobile apps? Tell us in the comments!