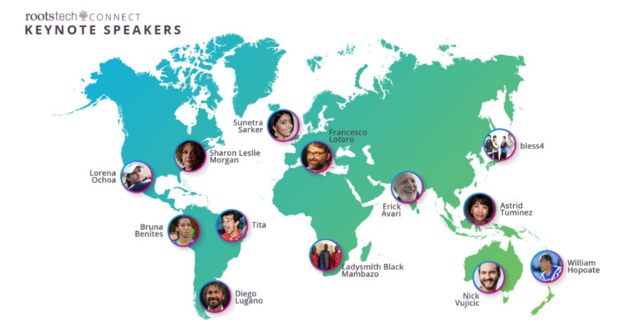 There are lots of firsts for RootsTech in 2021, which will be held February 25–27. Although the event is typically hosted in person in Salt Lake City, this year marks the first virtual-only gathering due to COVID-19. And for the first time, nearly 2,000 on-demand sessions will be available for free for 365 days.

Jen Allen, director of RootsTech, told Newsroom that a majority of the participants will also be attending for the first time. “It's just incredible when you look at [the fact] that 89% of these people have never been to RootsTech before,” she said.

According to Deseret News, the decision to make the event virtual-only was made in September of last year. After months spent researching different platforms, they ultimately decided to have a team of developers and engineers build their website.

“In the end, we realized no other platforms had what we needed, and we needed something that would take it to the whole world,” Allen told the Deseret News. “That was extremely challenging, still is, by the way. We’re going to be up and running, but it may only be a couple days before the event.”

But what else can you expect from this RootsTech this year? Here’s a look at what you should know before you attend.

On Thursday, Elder David A. Bednar, Elder Gary E. Stevenson, and Elder Dale G. Renlund will speak at the 2021 Temple and Family History leadership training. The theme draws on a promise from President Russell M. Nelson during April 2020 general conference: “I promise that as you increase your time in temple and family history work, you will increase and improve your ability to hear Him.”

The training can be viewed on-demand beginning anytime on February, 25, 2021, by visiting ChurchofJesusChrist.org/family-history or the Church broadcast page.

A Look into Elder and Sister Holland’s Early Life

On Saturday, Elder Jeffrey R. Holland and Sister Patricia Holland will take viewers to St. George, Utah, for a glimpse into their early life. Their address will show various locations important to the Holland family, including Elder Holland’s childhood home. The couple met in St. George during high school and dated for two years before Elder Holland served a mission.

“I could just tell you that my faith and my family are my most important possessions—and they are—but let me show you that instead,” Elder Holland wrote in a Facebook post.

Family Discovery Day will be streamed on ChurchofJesusChrist.org, YouTube, and the Latter-day Saints Channel on Saturday, February 27, at noon (Mountain Standard Time).

Learn about other cultures through personal videos submitted by attendees. These videos depict celebrations of heritage with foods, local sights, cultural dances, and other fun traditions and holiday celebrations.

RootsTech Is about More than Genealogy

RootsTech is not just for people interested in genealogy—the event is designed for anyone looking for connection. Steve Rockwood, CEO of FamilySearch International, said, “This transcends political borders, it transcends oceans, it transcends race.”

One RootsTech event is especially designed to help youth and young adults. The “Our Quest for Connection” series invites young people to engage in ten fun challenges to help them connect with their past, present, and future. Throughout this and other events, a chat feature is available for participants to connect with other viewers.

RootsTech is a gathering place for companies and vendors from around the world to demonstrate new products and give hands-on instructions related to family history research. You can learn from experts about how to find your ancestral town, record an audio life history, preserve fragile books (such as family Bibles), and so much more. Explore all the presentations soon to be available in the Virtual Expo Hall here.

Invitations and Excitement from Church Leaders

It’s a rare occasion when multiple Church leaders post about the same topic, but over the last several weeks, many Church leaders have issued invitations to attend RootsTech or shared how they have engaged in family history in their own lives.

President Russell M. Ballard shared a miraculous story about how his ancestors came into contact an edition of The Newberry Weekly News, a newspaper published in England while living in Cache Valley, Utah. The contents of the newspaper provided President Ballard’s ancestors with names they could take through the soon-to-be-dedicated Logan Utah Temple, an answer to their prayers.

President Dallin H. Oaks shared that he and Sister Kristen Oaks created their own family storybook that highlights stories from their ancestors that they read with their family.

Sister Reyna I. Aburto shared how she can still feel the love her ancestors today.

Elder David A. Bednar shared a recent experience he had with his granddaughter. His granddaughter initiated a Zoom call so she could learn about Elder Bednar’s parents, who she had never met.

Elder D. Todd Christofferson shared his experience participating in the launch of the Church’s FamilySearch website in 1999.

Sister Michelle D. Craig shared the story of her grandparents and explained how they have impacted her.

Elder Dale G. Renlund shared how his grandparents listened to missionaries and established a heritage of faith in his life.

Elder Quentin L. Cook shared a memory from RootsTech a few years ago where his wife and grandchildren shared a song about the importance of “[turning] the hearts of the . . . children to [their] fathers” (Doctrine and Covenants 110:15).

There are 13 internationally renowned keynote speakers at RootsTech this year. Some will even be speaking in their native languages. Here’s a brief look at each of their backgrounds:

• Bruna Benites: A professional soccer player for Sport Club Internacional, Benites hails from Brazil. She was the captain of the Brazil women’s soccer team in the 2012 Summer Olympics, won the CONMEBOL Copa América Femenina two years later, and competed in the Rio 2016 Summer Olympics.

• Bless4: Siblings Akashi, Aiki, Kansasa, and Akino were featured in a 20-minute episode of Meet the Mormons. The group has released three albums and 10 singles over the 18 years that they’ve performed together and they’ve contributed multiple songs to Disney Animation Studios’ Stitch!, based on the movie Lilo and Stitch. Their music will also be featured in the Ryukyu anime movie Tedashiro no Kamiuta.

• Will Hopoate: Australian Will Hopoate turned down a $1.5 million rugby league contract with the Manly-Warringah Sea Eagles to serve a mission. Hopoate was featured in the “I’m a Mormon” videos and he currently plays for the Canterbury-Bankstown Bulldogs as a fullback.

• Tita: Milton Queiroz da Paixão started playing soccer at age 11and entered the professional league at age 18. He is considered to be one of the best players in the history of Brazilian soccer and his career has taken him around the world, including Mexico, Japan, Germany, Italy, Guatemala, and the United States.

• Astrid S. Tuminez: In 2016, Tuminez told News Deeply that as a young girl in the Philippines, she was initially an “illiterate child, ignorant, malnourished, and insecure.” But as she gained her education and learned to read, everything changed. She would go on to attend Brigham Young University and later Harvard. Now, she has an impressive career and is the first female president of Utah Valley University.

• Nick Vujicic: Born without arms and legs in 1982, Vujicic has traveled the world as a motivational speaker and bestselling author. Of Serbian descent, he now lives in the Dallas area with his wife and told the Deseret News that sharing your family story is enlightening and affirms self-esteem.

• Sharon Leslie Morgan: A writer, author, and genealogist, Morgan lives in the home where her maternal enslaved ancestor once lived and is passionate about understanding her African American heritage. Morgan told the Deseret News that understanding family history gives one a sense of belonging.

• Erik Avari: From India, Avari left his home while young to try out acting in America. One day while researching an acting role at the Lincoln Center Library, he happened to discover a book about Bengali theater that talked about his great-grandfather. His great-grandfather, he learned, was the first producer to put women on the stage. Knowing your roots helps you grow upward, he told Deseret News.

• Lorena Ochoa: An athlete, mother, entrepreneur, and unbreakable promoter of golf in Mexico, Ochoa was the best player in the world for 157 weeks. In 2008, she was named one of the World’s Most Powerful People, and she was listed as one of the 100 Most Influential People by TIME. Her foundation focuses on the education of low-income children.

• Francesco Lotoro: A pianist, composer, conductor, and piano professor, Lotoro has been recovering, studying, revising, archiving, executing, and promoting thousands of concentrationary music for the past 30 years. The 8,000 scores he has recovered were often produced in a state of human deprivation in concentration, extermination, and civil and military imprisonment camps around the world.

• Sunetra: As a teenager, Suentra became well known for playing Nisha Batra in Channel Four’s Brookside. Some additional acting roles she has done include regular parts in No Angels for Channel Four, in Informer for BBC/Amazon Prime, in Safe House for iTV, and as Dr. Zoe Hanna in BBC 1’s Casualty.

• Diego Alfredo Lugano Morena: Currently an administrator for the Brazilian club São Paulo, Morena is a retired footballer and central defender. The Uruguayan played for a number of clubs in South America and Europe and captained his country at two FIFA World Cups. He also was named best captain at the 2010 tournament.