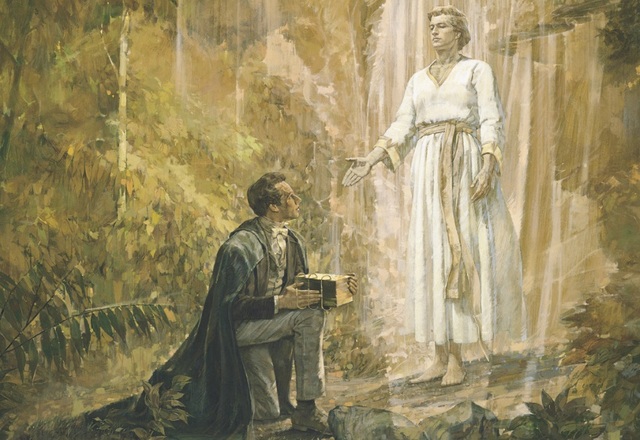 This article was originally published by LDS Living in August 2018 and is being shared again in recognition of the anniversary of the day Joseph Smith received the gold plates.

The prophet Joseph Smith would not have been the man God needed him to be without the help of others and without the events that shaped his life. Many historical events during or before the restoration of the Church influenced Joseph Smith and opened the way for new revelation. The Latter-day Saint Channel released a podcast series discussing the Church’s groundbreaking history, Saints: The Story of the Church of Jesus Christ in the Latter-days. Here are eight things you didn’t know about the Restoration of the gospel from this new podcast and book:

1. The eruption of a volcano in Indonesia was instrumental in Joseph Smith receiving the gold plates.

The most destructive explosion on earth in the past 10,000 years occurred in 1815 when the volcano Tambora erupted on the Indonesian island Sumbawa, according to Smithsonian Magazine. This eruption caused severe weather changes across the globe. It was a year without summer, and as a result, the Smith family’s crops failed and the family was forced to relocate to New York, where Joseph Smith later saw God the Father and His Son in a miraculous vision and received the gold plates by following the direction of the angel Moroni.

2. Lucy courageously defended her family from a man who attempted to steal their wagon and horses.

While traveling with her eight children to join her husband in Palmyra, Lucy Mack Smith hired a man named Mr. Howard to drive their wagon. Mr. Howard not only used the money they paid him to gamble and drink, he also attempted to steal from the Smiths. One day, Lucy heard from her older son, Alvin, that Mr. Howard threw their luggage in the street and left with their horses and wagon. Lucy decided to confront Mr. Howard. Here is an account from Saint: The Story of the Church of Jesus Christ in the Latter-days:

“Lucy found the man in a bar. ‘As there is a God in heaven’ she declared, ‘that wagon and those horses as well as the goods accompanying them are mine.’ She looked around the bar. It was filled with men and women, most of them were travelers like her. ‘This man,’ she said, meeting their gaze, ‘is determined to take away from me every means of proceeding on my journey, leaving me with eight little children utterly destitute.’ Mr. Howard said that he had already spent the money she paid him to drive the wagon, and he could go no farther. ‘I have no use for you,’ Lucy said. ‘I shall take charge of the team myself.’ She left Mr. Howard in the bar and vowed to reunite her children with their father, come what may.”

When the Smith family settled in Palmyra, New England was seized by an “unusual excitement on the subject of religion” (Joseph Smith—History 1:5). Different churches were competing for converts. Joseph Smith Sr., who had several spiritual experiences in his early life, was influenced by his father–who did not believe in organized religion—and chose not attend a particular denomination. Lucy, on the other hand, attended the Presbyterian Church with some of her children. Seeing his family divided by religion, Joseph Smith Jr. was eager to know the truth. One day, he heard a minister share a scripture in a sermon, saying, “If any of you lack wisdom, let him ask of God, that giveth to all men liberally, and upbraideth not; and it shall be given him.” He read this verse again at home and decided to act on the words of James.

4. Joseph Smith received a seer stone before the angel Moroni visited him.

In the 19th century, many people held a strong cultural belief that God would speak through objects, such as seer stones. Days before the angel Moroni appeared to Joseph Smith for the first time, Joseph and his brother Alvin were digging a well for a neighbor, and he found a small stone buried in the ground. Joseph wondered if this particular stone could be a seer stone, and later revelations he received through it confirmed this fact. Word quickly spread that Joseph was a seer.

5. The angel Moroni showed Joseph a vision of the good and evil of the world.

After Joseph was visited by the angel Moroni multiple times during the night and told his father about these visitations, he immediately set out to the Hill Cumorah to find the gold plates. On the way, he kept thinking about the worth of the gold plates and his family’s poverty. After arriving at the place Moroni had described, Joseph tried to reach for the plates, but he felt a shock and his hand jerked back three times. Moroni appeared once more and said, because Joseph did not keep the commandments of God, he could not receive the plates. Joseph understood he had forgotten the true purpose of the plates and began to pray for forgiveness. As he prayed, Moroni showed him a vision of the good and evil of the world. “All this is shown, the good and the evil, the holy and impure, the glory of God and the power of darkness,” the angel declared, “that you may know hereafter the two powers and never be influenced or overcome by that wicked one.”

6. The angel Moroni asked Joseph to bring Alvin with him to retrieve the gold plates.

After Moroni showed the vision of the good and evil of the world to Joseph, he instructed Joseph to purify his heart and come back to the same place a year later. He also told Joseph that he needed to bring the right person to retrieve the plates, and that person was his oldest brother, Alvin (Saints; Dean Jessee, “Joseph Knight’s Recollection of Early Mormon History,” BYU Studies, Autumn 1976, p. 31). However, just two months before their appointed date, Alvin came home with an intense pain in his stomach. After lying in bed for days, he called Joseph in before he died and told him to do anything in his power to obtain the plates and to follow every instruction that was given him.

With the passing of his brother, Joseph wasn’t sure if he could obtain the gold plates, but he thought he could keep all the commandments that were given to him. When the appointed day came, Moroni instructed him to get the plates and go home directly without delay. However, when Joseph set the plates on the ground to close the stone box that had held them, he turned around to find the plates missing. Moroni told him that he had failed to follow his instructions and he needed to come back a year later for the plates.

Joseph Smith and his father were on a treasure hunt when Joseph first saw his future wife, Emma Hale, in the fall of 1825. Joseph had been hired because of his ability to use seer stones. Emma’s father, Isaac Hale, supported this venture and let the workers stay at his house, where Emma and Joseph met. Although Emma’s parents disapproved of their relationship, because they hoped Emma would marry into one of the prosperous families in their valley, the couple married in January 1827.

8. Joseph and Emma retrieved the gold plates right after midnight.

The third time Joseph returned to the Hill Cumorah to obtain the gold plates, Moroni told him that he needed to quit his treasure hunting ventures and bring the right person with him the following year to obtain the plates. Joseph later learned that the right person was Emma. The appointed day quickly approached, but by this time many people had heard rumors and had been trying to search for the plates. To avoid the treasure seekers, Joseph and Emma planned to leave the morning of September 22, shortly after midnight. Joseph successfully retrieved the plates and the seer stones. He put them in a hollow log and secured them in a lockbox.

Joseph and Emma had to protect the plates from many people who tried to steal them. But after obtaining the plates, the translation of the Book of Mormon began and the Restoration of the Church of Jesus Christ was able to keep moving forward.

As we often hear, Joseph Smith's First Vision is foundational to the restored gospel: no Vision, no Restoration. It all starts there. If a major encounter between a fourteen-year-old boy and the Gods of the universe did not occur, then all that we teach and practice, all the good we strive to do in the name of Christian service, is vain and superficial—in the long run, it would have no saving significance for the children of God. What receives much less attention, however, is what we learn from Joseph's encounter with God the Eternal Father and His Son, Jesus Christ. When we begin to explore the theological concepts discovered, the lessons derived, and the principles learned from the Vision, we move into the realm of doctrine—and doctrine has the power to save. I Saw A Pillar of Light: Sacred Saving Truths from Joseph Smith's First Vision is available now at DeseretBook.com.