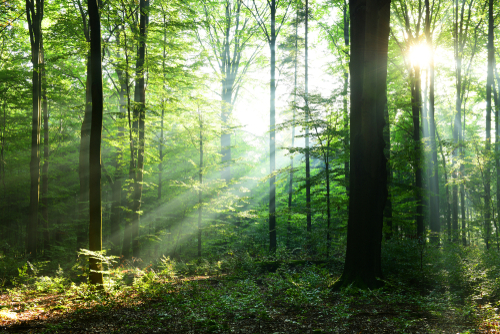 Editor’s note: Most of us are familiar with the story of the First Vision. Some might even have the account from Joseph Smith—History memorized. But that account is not the only time Joseph Smith shared his miraculous experience. Using nine different accounts, Muhlestein shares one harmonized story of the First Vision, including what led up to it and what Joseph learned from it, in his new book, I Saw the Lord. This excerpt offers an idea of what it might have been like for Joseph to have overwhelming, hopeless darkness dissipated by intense light as he first saw Heavenly Father and Jesus Christ.

► You'll also like: What the Church Has Said About Differing Accounts of the First Vision

With the light [came] a great sense of hope and comforting peace [following the intense, dark feelings of hopelessness].1 Yet the light was so strong and was growing so much that it seemed to Joseph that when it touched the trees where he stood, they would surely burst into flame. The light was that bright, that powerful; it seemed unthinkable that the trees would not burn. How could he survive such a raging fire? There was a part of Joseph that feared that having been delivered from the darkness, he would be consumed by the light.2 How ironic that must have seemed.

When we read the accounts of people who have had heavenly visions, they always seem to struggle with finding language to describe their experiences. We also often see that their experiences with beings and power so much higher than our own plane of existence caused them to fear. The glory of God and His messengers is awe-inspiring in the true meaning of the word. They are awe-ful, meaning that they are so wonderful they become frightening, and thus they can evoke terror, or seem terrible. Again and again in the scriptures we find that those who see God are overawed, and we see heavenly beings usually have to begin their discourse with mortals by first telling them that there is no need to fear. Beholding such a presence seems to naturally inspire a certain kind of fear.

Joseph Smith Jr. felt a degree of fear as he watched the brilliant, powerful light of heaven coming ever closer to him. Yet this worry was short-lived. He was amazed, like Moses, when he saw the light first shine from above, then rest upon the trees so brightly that it looked as if they were on fire, yet they did not burn.3 There was light, but no flame. When he saw that the trees did not burst into flames as they were touched by the light, Joseph was greatly encouraged, for it seemed, then, that he might survive as well.4

► You'll also like: What You Can Learn From the Church's New First Vision Podcast

Eventually the light rested upon Joseph himself. When the light did touch him, it brought with it not a searing heat but instead a powerful and unparalleled sensation.5 He was immediately filled with a sense of peace and joy that he had never known before, even “joy unspeakable.”6 This was a feeling that was beyond his capacity to experience on his own. He was fully engulfed in a sensation he could only describe as the “spirit of God.”7

It is likely that at least some of what Joseph was experiencing was the sanctifying power of God, bringing about what we call transfiguration, for all who come into God’s presence need to be transfigured. In his fallen state, Joseph would have had good reason to fear; he would not have survived an encounter with God. Joseph was about to come into the presence of God the Father Himself, a being whose purity and glory were beyond Joseph’s ability to withstand. Yet with God all things are possible, and Joseph’s nature was temporarily changed to a higher state. This is what happened to Moses when he experienced God’s presence (see Moses 1:2). It would seem, then, that at least part of the sensation the young prophet experienced as the light fell upon him was the feeling of being transfigured. Becoming a being of a higher realm, even if only temporarily, must have changed him for that time into a being that felt greater love, joy, and peace. Joseph was catching just a glimpse of what it felt to be Christlike. He was becoming, for a moment, a being that was compatible with the presence of a celestial being. This must have been a “peculiar sensation” indeed.8

There was another effect that came over Joseph when the light fell upon him. There was no doubt that what was happening was taking place in the world. Joseph saw the light resting on the trees near him and illuminating the wilderness all around, so the event had to have been taking place in the real world, in the actual geographic location where the young man was. Yet he reported that when the light rested upon him he found himself “enwrapped in a heavenly vision,” and that he no longer saw the world around him.9

As the things of this world faded from Joseph’s mind, that which he saw was so glorious that he could never describe it. As he looked into the pillar of light, he saw a being descend until it stood just above him, not quite touching the ground.10 This was God the Father, whom very, very few have seen since the Fall.11 As recalled by one convert, Joseph described Him as wearing white robes that covered His shoulder but left His right arm bare.12 This same convert also remembered Joseph saying that the Father had blue eyes and a light complexion.13

We cannot imagine what it was like to be in the presence of a divine being so full of might and majesty. But those who heard Joseph testify of this experience said that they felt more power in hearing him speak of it than at any other point in their lives.14 So it can be with us. We all can, and should, thrill as we read Joseph’s accounts of this vision, and in our minds hear him say, “I saw the Lord.”15

Lead image from Shutterstock. This article originally appeared in the March/April 2020 issue of LDS Living.

1. Alexander Neibaur’s 1844  account speaks of a feeling of comfort coming as the fire enveloped Joseph. This is a secondhand account and so the differing order cannot be fully relied upon. Thus, while the Neibaur account makes sense based on the order of feelings presented below, we cannot fully trust it.

3. In the 1835 account, Joseph Smith says that “this pillar of flame was spread all around, and yet nothing consumed.”

8. In the 1840 Orson Pratt account, Pratt says that as the light came upon him, Joseph Smith experienced a “peculiar sensation.”

9. 1838 account. This is also in the 1840 Orson Pratt account. In the 1842 Orson Hyde account, it says that the “world around him was excluded from his view,” making it sound as if the most likely scenario is that he was so focused on the heavenly things he saw that he no longer noticed the earthly which was around him.

11. While the 1835 account mentions only one being, most speak of two. The 1843 interview mentions that They did not come at the same time, and that the first being introduced the second as His Son.

12. 1844 Alexander Neibaur account. Because this is a secondhand account and is singular in recording these details, we cannot be certain of them. Yet they are worth including here for consideration. Typically such a specific detail is not misremembered or accidentally created in the mind of the listener.

14. Edward Stevenson, Reminiscences of Joseph, the Prophet, and the Coming Forth of the Book of Mormon (Salt Lake City: 1893), 4.

Find Kerry Muhlestein's book I Saw the Lord: Joseph's First Vision Combined from Nine Accounts on deseretbook.com or at Deseret Book stores. Joseph Smith's First Vision is the best-documented vision of God in the history of the world. Yet, because the details of the vision are spread over nine different accounts that vary in emphasis and some finer points, many people do not know all they could about this remarkable and world-changing experience. Kerry Muhlestein, professor of Ancient Scripture at Brigham Young University, presents a faithful, harmonized version of the First Vision story to show how each of the various accounts might share select aspects of the vision yet all be consistent with the actual event experienced by Joseph Smith. As the Prophet recorded or shared his remarkable vision, he emphasized different details depending on the audience and circumstances at the time. All nine accounts—four firsthand and five secondhand—are combined into one compelling story in this retelling of Joseph Smith's incomparable vision. Also included are the original accounts in their entirety so that readers can feel for themselves the powerful witness of the Prophet Joseph Smith. Strengthen your testimony of this singular, foundational event that would lead to the Restoration of Christ's church upon the earth.