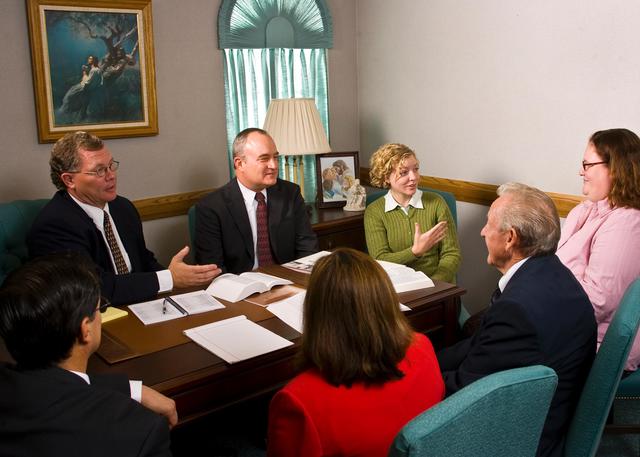 Recently, the Church announced that in 2018 "Teaching of the Prophets" manuals will no longer be used in Relief Society or priesthood meetings. Instead, ward leaders will be able to choose general conference talks and gospel topics to prepare lessons tailored to their ward's needs. Among these changes, the Church also announced that once a month a council will be held during Relief Society and priesthood meeting, a change designed to help bring wards closer together and make members more aware of each person's needs.

With this new change, we thought it would be helpful to publish this excerpt from Elder M. Russell Ballard's Counseling with Your Councils which explains why councils are divine and how you can make your councils more effective.

It has never been God’s intention that His children stand alone in important decisions and responsibilities. During our premortal existence, He Himself called for a grand council to present His glorious plan for our eternal welfare. His Church is organized with councils at every level, beginning with the Council of the First Presidency and the Quorum of the Twelve Apostles and extending right on through to our stake, ward, and family councils. . . .

One of the great strengths of the council system is the flexibility it provides to develop and implement local solutions to local problems. And as the needs and circumstances of individuals, families, and communities change over time, ward and stake councils—operating under priesthood direction and established Church guidelines—can focus their collective wisdom and the inspiration of heaven on such needs, thus blessing and lifting all who come within their influence. . . .

One of the key lessons Heavenly Father taught us in that “world of spirits” was the important role of councils and counseling together in gospel governance. From the very beginning God has done His work through a system of organized councils.

The first council of which we are aware occurred before the world on which we live was created, in a place all of us have been but none of us can remember. God, our Heavenly Father, was the presiding authority at this most significant gathering. . . .

Of course, we don’t know everything that happened during that premortal council. But based on what we do know, Heavenly Father’s administration of the Grand Council profoundly illustrates several key principles in decision-making through councils.

An Effective Leader Has a Sense of Vision

First, as council leader, Heavenly Father came to the council with a plan. While it is true that councils can be effectively used to actually formulate plans of action, it is also true that the leader must come to the council with, at the very least, a sense of vision. That vision doesn’t necessarily have to include every detail of what we want to do. But if the council is going to arrive at any meaningful decisions, the leader needs to know where we want to go and what we want to have happen. Without that leadership and sense of vision, how will the council ever know when an appropriate decision has been made?

When a leader in the Church inspires council members with vision, he helps them focus on their real mission so that they are ministering to people rather than merely administering programs. At the same time, this focus builds a strong team spirit that improves working relationships among all members of the council. . . .

Second, the Grand Council allowed different opinions to be heard. Satan’s arguments for a modification of our Heavenly Father’s plan must have been persuasive; many of our spirit brothers and sisters chose to follow him. The fact that he was allowed to express such differences in the first place is a testament to the importance of open dialogue in a council meeting. Similarly, our councils should always allow time for discussion and consideration of differing points of view. We may not always agree with everything others say, but we will all grow from having the opportunity to express ourselves and to consider opinions or approaches to a problem that may vary greatly from our own. . . .

An Effective Leader Respects the Gift of Agency

Another important principle we observe in the Grand Council in Heaven is that all of the council members had the precious gift of agency. This council was not an exercise in compulsion, nor was it a study in domination—even though a case could certainly be made that if ever there was a council that was led by a leader worthy to wield absolute authority, this was the one. Rather, it was an exercise in agency. . . .

The Creation story offers important lessons for those who serve in bishoprics and other councils of presidency. For presiding officers such as presidents and bishops, the Creation outlines three great leadership keys for accomplishment through council.

First, notice how Heavenly Father issued clear, precise instructions. He sent His chosen representatives out with clearly defined expectations, and then let them decide how best to accomplish the details. . . .

The second leadership lesson of the Creation for presidents, bishops, group leaders, and parents has to do with the breadth and the pace of the instructions God issued. He did not say to His council members, “Go out and create a world.” Although He had the full vision of what He wanted to have happen, He took His council through the process one step at a time, providing plenty of opportunity for reporting, counsel, and follow-up instruction along the way. . . .

The third lesson that presidents, bishops, group leaders, and parents can learn from the Creation council is that Heavenly Father didn’t do all of the work Himself—even though He certainly could have. As God, He had all of the authority and power He needed to create the world, and He clearly was the one who had the full vision of the project. Still He chose to delegate responsibilities, always asking for a follow-up report to make sure that the work had been done correctly.

Why would He do such a thing, especially when it probably would have been faster and more efficient for Him to simply do it Himself? In my view, one reason He did it was to establish a pattern for us to follow. . . .

An Effective Leader Sets an Example of Hard Work

There are also lessons in the Creation council for those who serve as counselors—lessons on the importance of listening, of carefully following instructions, and of “returning and reporting.” But perhaps the most basic principle illustrated by those who carried out Heavenly Father’s instructions during the Creation was the principle of “Let us go and do.”

When Jehovah was instructed by God to perform certain creative tasks, He did not respond by saying, “Let us see” or “Let us try” or “Let us look for time in our busy schedule.” Rather, He simply and powerfully said, “Let us go . . .” (Abraham 4:1). His attitude indicated that He was anxious to do His Father’s will, not to sit around and talk about it. . . .

An Effective Leader Teaches by Precept and Example

That Jesus is committed to the council concept cannot be questioned. Twice in ancient times He personally organized His Church on the earth, and both times He established it with governing councils. In both the Holy Land of the New Testament and the promised land of the Book of Mormon, He spent considerable time teaching and instructing and training His councils and council leaders, and then He sent them forth to share what they had learned with others. . . .

An Effective Leader Serves with Love

How critical it is that all who serve together in God’s kingdom do so from a foundation of love: love for the Lord, love for the work, and love for each other. No matter how intense our effort or how carefully we follow the handbooks and guidelines, if we don’t truly love each other we can’t possibly hope to convey the full power of the gospel of love. And I can’t help but believe that members are more likely to seek counsel from leaders from whom they feel sincere love emanating. Miracles seem to follow after Church leaders who are motivated by a keen feeling of loving devotion to those over whom they preside. . . .

With the love of Christ reflecting from all Church councils and radiating throughout an entire quorum, auxiliary, ward, or stake, a significant difference can be made in our lives and in the lives of our family members as well as all of our Heavenly Father’s children. And making a difference in people’s lives is, after all, the great mission of Church councils, which had their beginning in the heavenly councils we saw and experienced in our premortal lives.

Get more incredible insights in Elder Ballard's Counseling with Your Councils.