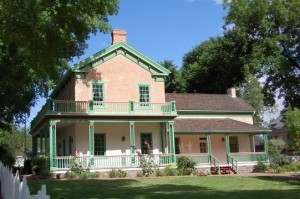 Church history sites dot nearly every corner of Nauvoo, Illinois. Upstate New York and Kirtland, Ohio, have their share of historically significant places too. But families living in Utah County don’t need to drive across the country to learn more about the heritage of The Church of Jesus Christ of Latter-day Saints.

The Mormon Historic Sites Foundation, which was originally formed in 1992 as the Ensign Peak Foundation, works to identify, preserve and commemorate places of historical importance to the Church. These 9 Utah locations are some of the foundation’s registered historic sites and are all within a few hours’ drive from Utah Valley.

Significant because: Cove Fort is the only fort built during the settling of the Utah Territory that remains standing. It was built in 1867 under the supervision of Ira Nathaniel Hinckley, grandfather of President Gordon B. Hinckley. Ira Hinckley was called to do so by Brigham Young.