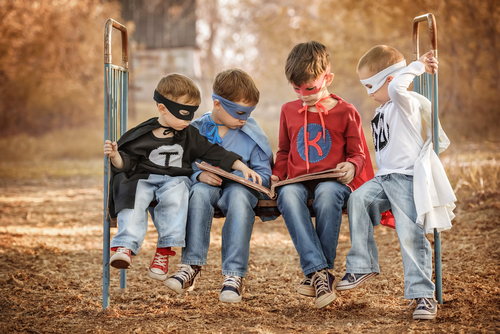 It‘s no question that in the past few years, superheroes have saturated our movie theaters worldwide. While opinions are divided on whether this is a good or a bad thing, a franchise this successful is clearly resonating with and engaging audiences. Whether you support the movies or not, anyone willing to take a closer look may be surprised to see some gospel symbolism in many superhero movies. Here are just a few examples:

Man of Steel is about Superman before he became a superhero. Despite having loving parents and a reasonable upbringing, Superman hides who he is from the world out of fear, avoiding the higher calling given to him by his birth father to be a savior and guiding example to the people of Earth. In time, Superman learns to accept the responsibility given to him and in doing so, saves the world. One gospel parallel we can draw from this movie is that each of us has a higher calling that awaits us, just like Superman. This movie sets an example of heeding that higher call and can inspire us to make the necessary sacrifices to fulfill what our Father in Heaven has asked of us.

Captain America struggles to fit in with the rest of his team when his childhood friend Bucky is framed for terrorist activity. Captain America has faith in Bucky and believes him to be innocent, but half of the team believe Captain America is being naïve and stubborn. Throughout the movie, he is forced to fight for who he believes in, even though it tears the team apart. Captain America’s actions teach us that there are both benefits and costs for standing up for what you believe in and remind us of some of our own gospel teachings, such as forgiveness and loyalty.

In this movie, Wonder Woman leaves her safe and protected island to fight the fallen god Ares, who she believes is corrupting mankind. When she finally confronts him, he seems to overpower her. She only triumphs once she embraces that she isn’t merely a creation of clay but the daughter of the almighty Zeus. Likewise, embracing our own divine heritage will help us overcome the world. As Elder Tad R. Callister has said,

“Why is it so critical to have a correct vision of this divine destiny of godliness of which the scriptures and other witnesses so clearly testify? Because with increased vision comes increased motivation. . . . As we better understand our potential destiny, our level of self-worth and confidence and motivation is greatly heightened.”

The original Iron Man is very reminiscent of the story of Alma the Younger. Iron Man is the story of a man lost in his wealth and power with very little concern or care for the world or others around him. Like Alma the Younger when he was chastised by an angel, Iron Man’s life changes when he comes face to face with the consequences of his actions. He is held captive by terrorists who are using weapons that his company supplied them with. After escaping, Iron Man dedicates his life to righting the wrongs of his past and taking a higher path by becoming a hero. To me, this movie is a beautiful example of repentance while staying grounded in the reality that change is hard and takes time.

Thor: Ragnarok represents, to me, a parable of home and of Zion. One theme of the movie is that Thor’s home, Asgard, is wherever his people are. After being separated from his people, Thor spends the majority of the movie trying to get back home. Even though he is far away on a distant planet, he finds friends and allies to aid him. Likewise, in our lives, Zion is wherever there are faithful Latter-day Saints around us. No matter where we go in the world, we can always have strength knowing that we have brothers and sisters we can reach out to for support.

► You'll also like: If the Avengers Were Latter-day Saints

Black Panther is about a prince whose birthright is taken from him by a bitter man, Erik, who is out for revenge. After being dethroned, Black Panther is forced to wage a civil war just to get back the kingdom that is rightfully his. At its core, Black Panther is a story about atoning for the mistakes of our parents. Spiritually, it can represent the lengths many of us will have to go to in order to claim our birthright: eternal life. When we are born into less–than–perfect homes, often the mistakes made by our parents or other leaders in our lives can lead to roadblocks that seem to prevent us from claiming our birthright. This film can act as a representation of how to push past those obstacles and claim the gift of exaltation that our Heavenly Father so desperately wants to give us.

In Green Lantern, an ace pilot must use his willpower to overcome his fear before an intergalactic being named Parallax—who feeds off fear—consumes the planet. I like to think of that willpower as faith. Faith is what gives us power against the universal enemy, Satan. In this sense, the Green Lantern faced a similar trial as Esther in the Bible. She, too, had to overcome great fear by risking her life to save her people. When we are surrounded by darkness and fear, it is faith that can overcome it and allow us to triumph over the adversary, just like Green Lantern’s willpower allowed him to overcome Parallax.

A lone wolf drifter, an awkward kid, the daughter of a god discouraged by the evil in the world, a guilt-driven man, and a man ashamed of how he looks and who he is. These are the heroes of the movie Justice League. Many of us can relate to those character descriptions, and we believe those identities make us unable to help others or change the world. But if we learn anything religious from Justice League it is that every single one of us can make a difference in the world. For us, it is a reminder that we can all take part in the building up of God’s kingdom on the earth, no matter our flaws—we just can’t do it alone. Like Elder Jeffrey R. Holland has said,

“It is by divine design that not all the voices in God’s choir are the same. It takes variety—sopranos and altos, baritones and basses—to make rich music. . . . When we disparage our uniqueness or try to conform to fictitious stereotypes . . . we lose the richness of tone and timbre that God intended when He created a world of diversity.”

After an age of superheroes, a villain named Thanos comes to earth, seeking to destroy half of the universe. Despite the sacrifice of Doctor Strange—a superhero who claims his sacrifice was the only way they could win the war—Thanos is successful in his efforts, leaving half the universe in ruins and the heroes scattered and defeated. When I watched this film, it reminded me of the Great Apostasy. After Christ sacrificed Himself to save us all—the only way to allow us to be redeemed—His apostles were slowly scattered and murdered. The age of light and knowledge ended, and the world entered a period of darkness without its “heroic” prophets to lead the way.

What gospel parallels have you seen in superhero movies? Share them with us at comments@ldsliving.com. You can also take our quiz below to find out which of eight favorite superheroes you are!