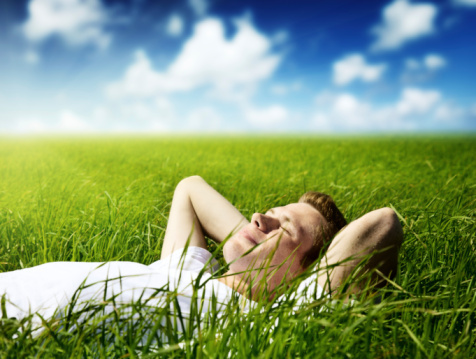 9 Ways Being Happy Will Improve Your Life

Sister Marjorie Hinckley once said, “The only way to get through life is to laugh your way through it. You either have to laugh or cry. I prefer to laugh. Crying gives me a headache.”

Sister Hinckley was on to something when she came to this conclusion. Science, more and more, is finding that negative emotions like stress can have drastic and adverse results in our lives, while being happy can provide measurable improvements in our health, lifespan, relationships, work productivity, salary, and more. Read on to learn more about how positive thinking can effect positive changes in your life.

1. Get Sick Less Often and Less Severely
People who are happy get sick less often than unhappy people, and when they do get sick, their  symptoms are less severe, and they feel them less acutely.

In one now-famous study, Dr. Sheldon Cohen of Carnegie Mellon University evaluated the mental health and general positivity and negativity of research subjects and then isolated them in separate hotel rooms after infecting them with a cold virus. Each day, the reclused research participants were subject to several medical examinations to determine their health status and also had to complete a checklist of the number and severity of their symptoms.

The study concluded that people who were more positive were also more resistant to catching an illness, and when they did catch it, they experienced the illness less severely.

Other research has concluded that those who are happy have lower rates of accidents, homicides, mental disorders, drug dependency, liver disease related to alcoholism, and cardiovascular disease.

2. Lower Your Risk of Cardiovascular Disease
According to the Centers for Disease Control and Prevention, heart disease is the leading cause of death in America. Luckily for you, a positive attitude can also lower your risk on this front. People in happier nations tend to have fewer problems with high blood pressure, which can lead to even further heart problems (read more about hypertension here). People struggling with depression and other negative emotions are several times more likely to have a heart attack and suffer from hypertension than those who are not. People who are stressed have higher heart rates, which puts them at greater risk, and unhappy people produce 12 times as much fibrinogen as happy people—and high levels of fibrinogen also predict heart disease.

3. Feel Less Pain
Those who are happy have an increased ability to handle physical duress. Researchers induced angry, sad, and fearful moods in test subjects and then had them evaluate their level of physical pain in response to a stimulus. Those who were experiencing negative emotions had a much lower pain tolerance threshold when compared to those who didn’t.

In another study, published by the National Institutes of Health, women who experienced negative emotional distress prior to surgery also reported more pain and side effects one week after surgery when compared to those who had more positive emotions entering into the surgery.

Dr. Cohen’s study at the hotel reached the same conclusion: while those who were happier actually experienced less severe physical symptoms, their mental perception of the difficulty of those symptoms was also lowered.

4. Live Longer
With all of that said, it’s no wonder that research has repeatedly found that those who are happy live longer than those who are not.

In a study of cloistered nuns, those who explained their life history and reasons for entering the convent in a more positive manner lived much longer than those who did not. Years after the nuns wrote their autobiographies, scientists looked at their lifespans and noticed that at age 85, only 54 percent of those categorized as least happy were alive, as opposed to those who were happiest, 79 percent of which were still alive. At age 93, the difference became even more pronounced: only 18 percent of the most negative were still alive, as compared to a whopping 52 percent of those who were happiest. Those who filled their autobiographies with happy words lived 10 years longer than their unhappy peers.

Part of this may be explained by the fact that people who are happier literally age at a slower rate.  When examining the DNA of fraternal twins in England, researchers found that the sibling with the more stressful life had DNA that was significantly more aged than the one with an easier life. And in another study, mothers with the greatest levels of stress had DNA that was nine to 17 years older than their non-stressed counterparts.

5. Have More Energy
Being happy can also translate to more energy, says Dr. Elia Gourgouris, a clinical psychologist and president of The Happiness Center. “Depression and sadness and unhappiness in general deplete you of energy, like you have this leak in your system,” he says. “Happiness not only plugs up that leak but begins to build up a reserve.”

6. Have Better Relationships
People who are happy are also more extroverted and more enjoyable to be around, which makes them more likable and popular. Happy people tend to attract friends easily, but the cause-effect relationship of social interactions and happiness is not one way. People also become happier when they have more meaningful friendships and spend time with people. This, in turn, can cause them to attract even more friends, and thus perpetuate the cycle.

7. Get Married Sooner
And in what is not likely entirely a coincidence, happy people get married earlier than those who are unhappy, probably because, as explained above, they attract people to them in all capacities. One of the most common items on youths’ lists of qualities for future spouses is a sense of humor—not someone who complains all the time.

An analysis of the yearbook photos of students attending Mills College in the late 1950s produced some interesting proof: women whose photos displayed a “true” Duchenne smile, as opposed to one that was more forced (or not present at all), were more likely to be married in middle age and more likely to be happier in those marriages.

Part of that may have to do with the effects of positivity on appearance: “They become more attractive,” says Gourgouris. “A woman who is confident and happy is much more attractive than anybody else that has all the makeup in the world. And same with a guy.”

8. Get Recognized for Your Achievements at Work
Turns out, being happy will help you to be more productive at work, make better decisions, and think more creatively. And what’s even better, you’ll be recognized for it at work by your co-workers and supervisors. In one study, people took a happiness survey and then—years later—their respective supervisors filled out work evaluation forms for those same people. The employees’ happiness or lack thereof was directly correlated with how highly their supervisor rated their work.

9. Earn More Money
And, perhaps because of that increased work effectiveness and recognition from supervisors, being happy can contribute directly to the amount of money you make, too. Ed Deiner and Robert Biswas-Deiner, authors of the book Happiness: Unlocking the Mysteries of Psychological Wealth, evaluated the happiness of students entering college in 1976, then took a look at their incomes several years later, when the students were all nearing middle age in the 1990s. Those who rated themselves as happiest when entering college were earning a 30 percent higher salary than their least happy counterparts—$65,000 per year, as opposed to $50,000.

Are You Happy?
Do you want to reap the benefits we just described? First, take this quiz from The Happiness Center. Don’t be discouraged if you see a lot of room for improvement, though. Only 50 percent of our capacity for happiness is determined by our nature, and only 10 percent is determined by our surroundings and circumstances. The remaining 40 percent is all up to you. Check out our Get Happy article to learn specific steps you can take to increase your happiness and life satisfaction today.

Health Happiness Self Health RelationshipsHappiness,Self,Health,Relationships,Health
Comments and feedback can be sent to feedback@ldsliving.com