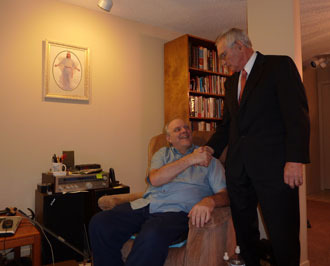 A 10-day Christmas makeover from an Oregon ward

On the Sunday before Christmas, a member of the West Hills Ward of the Beaverton Oregon Stake suggested an idea for service.

In that ward lived a devoted brother — a former bishop — who tirelessly and quietly serves as the ward membership clerk. Kent Anderson suffers from a degenerative neurological condition that has robbed him of his ability to walk, and he is now confined to a wheelchair.

He lives alone and fends for himself quite nicely, but he is unable to perform many of the maintenance tasks a home requires. In the past, he has refused offers by ward members to paint the walls because he didn't want to put a burden on anyone for such a job.