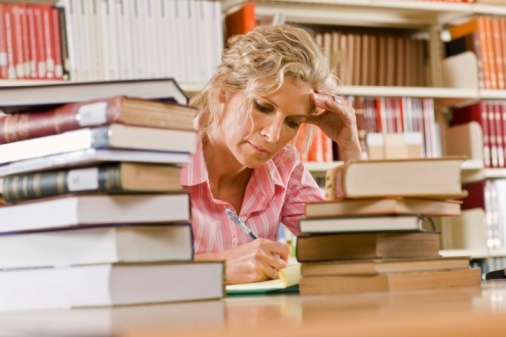 A Degree of Sanity

It’s no secret that Latter-day Saints tend to marry young—at least younger than the national average. And so for many young wives and mothers, that means adjustments in educational pursuits. I married at eighteen, though I adamantly include the fact that I was only two months away from my nineteenth birthday.

I finished two semesters at Weber State University in Utah before my husband and I moved to the Big Apple where my husband received a scholarship at Hofstra University. You know what they say about New York: “If you can make it there . . .” The pulsing pace of New York was a new world for me and even Ol’ Blue Eyes and his crooning didn’t offer much encouragement for a newlywed who had never lived away from home.

Expecting Change
After we settled into our studio apartment with fluorescent bulb lighting, we took an outing to the nearby community college only to find out that due to a discrepancy between the quarter system at Weber State University and the semester-based system at the community college, only eleven of my previous thirty-seven credits would be accepted. I started working full-time and enrolled in a few night classes. But my hope of finishing school was quickly becoming just that, a dim hope.

Near the end of my second semester of night classes, Dr. Sherwin had a bit of news for us: I was nine weeks pregnant! I finished that semester and set aside my textbooks for What to Expect When You Are Expecting. I felt so elated about becoming a mother, yet distraught at the lack of my educational progress. I prayed for peace and an eventual solution. I enrolled, yet again, and took a few Saturday classes when our son was a year old. At the rate I was going, I realized that my son would probably graduate from college
before I would.

A few years and children later, a sister from my branch told me about Empire State College, a state university in New York for adult learners offering independent study and distance learning courses. I am ashamed to say it took me another year to finally make a phone call and schedule an orientation appointment. I let so many things hold me back—I was afraid I couldn’t do it. I was afraid of the hard work; I was afraid of becoming desperately overwhelmed. How could I go to school? Where would I find the time?

My husband was serving as a branch president and was a full-time law student. I had a district seminary calling and three active boys ages six, four, and two. It just didn’t seem possible. After praying about it and receiving encouragement from my husband, I made the phone call to request an orientation packet. I went to orientation and enrolled in school full-time. Empire State accepted all of my previous credits; I was officially a
student, and this time a student with hope.

Developing a New Routine
I quickly found that the recipe for student status calls for late nights, reading entire textbooks, and reproducing large amounts of information onto paper. Logically, the best time for me to study was after my children were asleep. But I think most mothers can relate to the struggle of being productive in the evenings. After picking up the same Legos fifteen times, preparing, serving, and cleaning up “nutritional meals and snacks” multiple times a day, driving all over town to find leaves for a first-grader’s science project, picking up another kid from lessons, then remembering to feed the bills and pay the cat… yes, I think you can relate.

After I kiss my three boys goodnight and get everyone in a horizontal position, I am beat. I am ready for a spa treatment or at least a comfy couch. In the past, I would sometimes grab a little snack and just “check to see what’s on TV.” Before I realized what was happening, I was engrossed in what Grandma Beth called “watching other people live their lives.” I had to turn off the TV to get a degree. After I enrolled I decided to act as if I had class Monday through Thursday at 8:20 p.m. I no longer had time to watch television.

During my last few semesters of school, my husband’s workload increased to sixty- to eighty-hour weeks. Our fourth child, a daughter, was born right in the middle of Children’s Literature, Introduction to Photography, and Poetry.

Going back to school after years of being out of the scene is, well, intimidating to say the least. Deciding to make that leap back into academia may not be for everyone, but if you have decided it’s the right choice for you, here are a few suggestions for making that transition a little easier.

Why are you going back? Is it to fulfill a goal set long ago, to advance in a career, to grow personally? Make a list of the advantages and disadvantages. Discuss your list with your spouse or another adult family member if you are single and prayerfully consider all of the benefits and consequences of this decision for you and your family.

Consider online options. Maybe you like the idea of being able to get a degree, but sticking to an in-class schedule just isn’t going to work for you. In this case you might want to explore the many online degree options available (correspondence and independent study courses would also be
included in this category). For example, BYU’s Independent Study division
offers approximately 350 independent study courses and 211 secondary
education courses—just think of your choices! (Find out more about BYU’s
independent study programs at ce.byu.edu/is/site/)

But be wary; there are plenty of scams online, as we all know. Do your research and ask to be sent additional information before agreeing to or paying for anything. A good site to start researching online degree options is backtocollege.com. If online is the route you choose to follow, keep in mind that just because you don’t necessarily have to be at class at a certain time each day, you should still treat an online experience in a prioritized and organized manner, otherwise it will just continually be pushed to the backburner and will probably never be finished.

What do you want to study? Sometimes it takes a traditional student years to decide on a major. Depending on how far along you already are in your studies, you may not have the luxury of taking that long, but you do have several more years under your belt during which you’ve learned what your interests and strengths are. If you’re not sure of a course of study, and even if you think you are sure, meet with one of the college’s academic advisors. Use his or her help (regularly) in devising a plan that will help you go in a direction that will make you happy, meet your goals, and do both in a timely manner.

Additionally, every college or university is different as far as their semester/term/quarter divisions and their credit systems. An advisor will help you sort out how many of your previously earned credits will count at a new school, and how these credits apply to a major or to elective courses.

Don’t give up too soon. Your first few days or weeks back will be filled with roller-coaster emotions. Some days you’ll feel exhilarated and energized by the prospect of all you’re going to learn, and the next moment you may feel completely overwhelmed and under equipped for what’s expected of you. When you come upon these overwhelming moments, don’t throw in the towel too quickly. Speak with your professors so that they are aware of your unique situation as a mom (while not making excuses for yourself), and look into sources of help like labs, tutors, other students, study groups, etc. But, if you do feel like (after giving it a good shot) a certain class is simply out of your league at this point, be sure to drop it or withdraw before it’s too late and you’re left with a penalty or failing grade.

Get involved. When you’re in class, leave any home problems at home. Give yourself that hour to concentrate on just that class. Listen to the discussions and raise your hand and participate. Be friendly with others in your class so that if a study group is created, you know about it and are invited to join (or create your own!). Don’t be intimidated by your professors—use them, that’s what they get paid for! Find out their office hours and introduce yourself—make sure they know who you are. Make an appointment to meet with them if you are struggling with something or feel you need a little extra help or clarification on a specific topic.

Re-learn how to study. Between the last few years’ episodes of Barney or reruns of Saved by the Bell, you may have forgotten some of the skills you started to learn in high school or college about how to study effectively. Find out, as quickly as you can, what works best for you—and it’s probably not at the kitchen table in between the baby’s bites of turkey puree. Most colleges offer elective courses in study skills and related topics, and enrolling in one would certainly be time well spent if you’re feeling apprehensive about your skills (or lack of).

Time management will also be a big issue in relation to studying. You’ve learned to balance kids, husband, extra-curricular activities, meal preparation, family fun time, etc., but tossing study time into that mix will be a huge adjustment. Throw the word “procrastination” out of your vocabulary as soon as you enroll. Set daily goals for yourself and do your best to get ahead so that on those days that you’re simply too tired, you’ll have a little slack in place.

Start slow. Maybe it will take you a few extra semesters than it would have pre-family, but that’s okay. Start out with a light class schedule and then, if it feels right, work up to more credit hours as your family becomes older and more accustomed to the new routine.

We all want to be good mothers. When we look at our responsibilities with purpose, we love our jobs, even if we are submerged under loads of grass-stained laundry and piles of casserole-encrusted dishes. Mothering is an education all in itself, only the credits we accumulate are eternal.

I am going to the Metropolitan Museum of Art next week. Now, I will know to look for Mary Cassat’s paintings. Maybe on the train I will bring my literature book and read some of Brooks’s poetry. School offered me knowledge—knowledge that I can pass on to my children. Perhaps my children will look at my graduation photo someday and remember Mom doing her own homework at the kitchen table, or maybe they will remember the photography exhibit we visited in Cold Spring Harbor that summer. Hopefully, they will realize that it was their graduation, too.