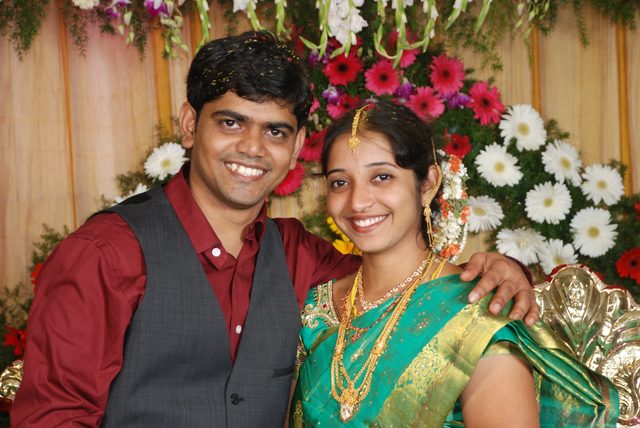 From Arranged Marriage to Temple Sealing: A Different Kind of Latter-day Love Story

Prabhu Pothuri and Divya Pothuri are sitting together in a classroom in a Latter-day Saint chapel in Wilson, North Carolina, an estimated 8,500 miles away from their native India. Aside from Divya’s traditional Indian sari, they appear to be like any other couple worshiping in the chapel. But the Pothuris’ love story began very differently than most Latter-day Saint couples. The Pothuris had an arranged marriage.

An estimated 84 to 90 percent of marriages in India—depending on your source—are arranged. For the Pothuris, their parents began looking for respective matches for their children when their children were settled and ready to begin family life. In Prabhu’s case, he was in the United States pursuing a master’s degree when his parents began to look for his future wife on a matrimony website.

Prabhu was born into a Hindu family and even today he continues to observe some Hindu traditions like shaving a baby’s hair, a tradition called “Mundan” believed to have many benefits to a child’s development. However, when he was 3 years old, his parents converted to Christianity.

When Prahbu was 14 years old, his mother encountered two young men in white shirts and ties who were meeting with a family that lived close to his mother’s business. She inquired who the men were and was told they were teaching about Jesus Christ. She mentioned to her son that he might be interested in speaking to them, but Prabhu did not think much of it until one day a couple of weeks later when the thought came, “What if I talked to these guys?” He did, and soon he, his brother, and two friends were taking the missionary lessons together and were baptized. He calls his four years as an early-morning seminary student arising at 4 a.m. “the best four years that I had.” Unfortunately, after high school, he briefly fell away from the Church but eventually found his way back.

It was this religious background that partially influenced Prabhu’s parents in their search for a suitable match for their son. In addition to looking for common qualifications like a good education and family background, they were looking for a Christian woman to marry their son—a difficult feat within a caste system that, according to Prabhu, is 99 percent Hindu.

Divya’s parents joined a Christian church before she was born. Like Prabhu’s family, Divya’s family are the only Christians among their extended Hindu relatives. Still, despite their shared family Christianity, Prabhu and Divya’s experiences with faith as they developed into adults were vastly different.

Growing up, Divya struggled to feel a desire to attend church with her family at the Church of South India. “In India, most of the places are corrupted with money,” she explains. “They don’t even talk about God. They only talk about money.” She says she couldn’t feel the Spirit when she attended church with her mother, as people were often fighting about money and status. This led to many arguments with her mother because she didn’t want to attend. Her mom encouraged her to go to church and not think about others.

“It’s about your thing only,” Divya remembers her mother saying. “Don’t think about others. You just come and pray to your God and come back home.” Despite her mother’s best efforts, Divya still felt little desire to attend. Despite her reluctance to attend church, Divya was still a Christian, and Prabhu’s parents were drawn to her as a potential match for their son. After a discussion with Divya’s parents, it was arranged for Divya and Prabhu to meet virtually, as Divya was still living in India while Prabhu was in the United States.

When she was introduced to Prabhu over Skype, Divya thought very little of his being “a Mormon.” She had never heard about Latter-day Saints and didn’t even know what it meant. Instead, she was impressed by Prabhu’s honesty. Their initial conversation went well, and despite their different religious practices, the two saw potential in each other and agreed to the marriage their parents had planned.

The couple makes it clear that although their marriage was arranged, they still had a choice in the matter and could have withdrawn from the arrangement. But after their initial conversation, Prabhu returned to India and, within 15 days, the two were married at a traditional Indian wedding with 2,000 to 3,000 people in attendance.

From that day forward, they have made efforts to strengthen their choice.

Finding Faith and Building a Marriage

“When we were married, we knew it was a long way to go, and there will be some problems that come in day-to-day life because we grew up in a different mindset and different regions. So to me, there will be some contentions most likely . . . but we have to come to a common ground somewhere,” Prabhu says.

Aside from Bride and Prejudice, Prabhu and Divya’s love story is definitely not the type of romance you would see portrayed in a Hollywood movie, but Divya knows that love is much more than what we see in movies.

“In our real lives, love mainly depends upon our understanding,” she says. One of the first things Divya set out to understand upon marrying Prabhu and moving to the United States was his religion.

“When I first came to the US, I silently sat on a couch in church. I didn’t understand anything.” Divya recalls thinking, “‘What are they talking about? What are they doing?’”

She began meeting with missionaries in Columbus, Ohio, and after one year, she felt “This [church] was the right place to meet God” and was baptized. Three years after their marriage in 2014, they were sealed in the San Diego Temple on April 6, 2017. 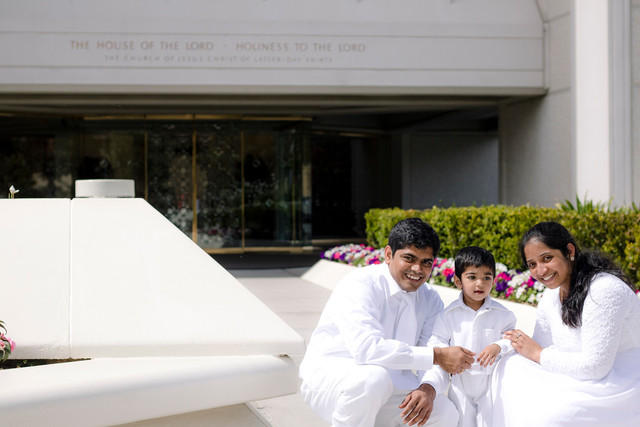 A “Pathway” to Greater Understanding

Divya is not alone in working to create understanding in their marriage.

He noticed that her English began to improve and her understanding of eternal families and the gospel seemed to improve. But for Divya, Pathway Worldwide did even more than that.

“When I first came to the United States, I was scared to talk with people. I knew how to talk in English, but the accent and everything is different. I felt like if I was talking to someone, they might misunderstand because of my accent, so I didn’t want to do that. . . . I didn’t want to talk to anyone,” she says, her voice breaking as tears begin to roll down her cheeks. “It’s all happened because of this Church. With the help of the Lord, now I am free to talk to anyone. I’ve got a lot of self-confidence. I can do anything.”

After seeing the profound impact this experience had on his wife, despite having a master’s degree and a job in IT for BB&T, Prabhu also enrolled in Pathway.

“I thought, ‘Okay, I want to feel the same experience that she has,’” he says.

He says he has not only seen why the program benefited his wife but has also come to better understand how gospel learning can intersect with secular learning.

“That was wonderful,” he says. “I wish I had that education growing up so that I could always be close to the gospel.” 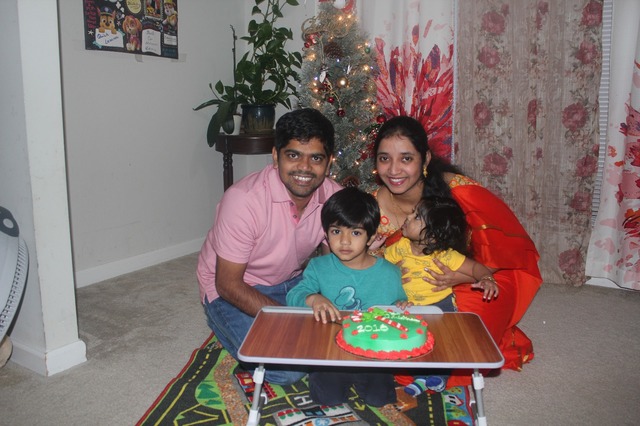 Finding Joy in a Different Kind of Love Story

With nearly six years of marriage behind them, Prabhu and Divya have discovered more and more things to love about each other.

“After we were married, I have seen the quality of service that [Divya] has and deep love toward others, whether it be our family or just going and helping others in need,” Prabhu says. “We are so happy that we have that common quality between us to help others."

For Divya, Prabhu was and still is an answer to many prayers.

“Every day before I got married, I prayed to God to choose the right person for me. . . . I made a promise with God that I didn’t want to take any chances,” she says. She recalls praying to God, “Choose me one person so that I can marry my life with him.” She continues, “When I got married, there was never a day where I thought, ‘It’s not good.’ He made my life very good.”

Still, sometimes when she is watching a romantic movie, Divya wonders what it would have been like to have a more modern love story. “Sometimes when she watches a love story, she tells me, ‘It would have been great if we both loved [each other] before marriage or dated before marriage and then got married,’ but we didn’t know each other,” Prabhu says with a grin as his wife rubs his arm affectionately.

Prabhu says he thinks the love story they are telling, more through acts of service and care than through words, is perhaps even better than what they see in movies.

“I’m not sure in [the case of] an arranged marriage if love can start before the marriage unless they start dating for many days,” he says. “We got married and then our love starts. I feel that might be better than loving because we are already bonded to each other and from there, we have to work hard. So far it’s working pretty good, and we are happy for that. I’m pretty sure it will work until the end.”

All images courtesy of the Pothuri family.