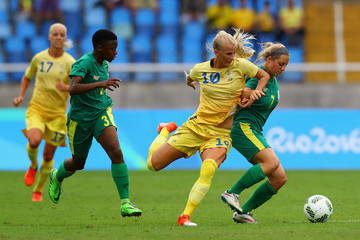 After her parents immigrated from South Africa to the U.S. 25 years ago, Malherbe obtained dual citizenship to both countries.

Though she never thought she would be an Olympian, when an opportunity arose for Malherbe, a member of A&M's soccer team, to try out for the South African Olympic soccer team for the 2016 Rio Olympics, she decided, “We figured why not just try and see what happens."

After sending a highlight tape to South African coaches, Malherbe was invited to attend a three-week tryout after her freshman season in Johannesburg. However, she didn’t hear anything back from the team until after her sophomore season at A&M, when she received an email asking her to spend the next eight months training and trying out for the Olympic team. An invitation that came to her at a critical time in her life.

“I had just finished my sophomore season at A&M and had a great semester. I was so comfortable and happy with my life,” Malherbe said. “But really, at that point, my faith was really struggling. And I was struggling with fully submitting and surrendering my life to God. I didn't really know what that looked like. I didn't know how to do it.”

Malherbe struggled with what to do. As well as things were going at A&M, she continued to feel a pull toward giving the Olympics a serious try.

“As much as I was struggling with this, I could not deny the fact that I knew God was telling me to go. I could just feel it. It was so clear,” Malherbe said. “I remember crying, praying, asking God, ‘Please don't make me do this. I really don't want to go. Don't do this to me--I'm happy here.’ But in the end, He was telling me to go, and I had to obey. I had to trust in His plan.”