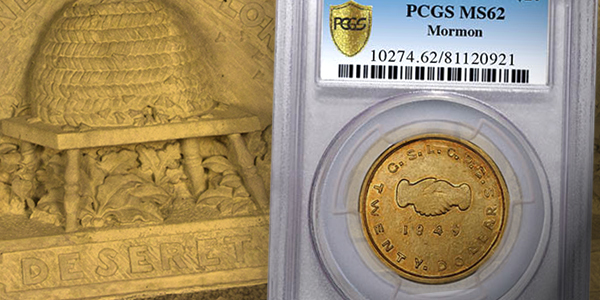 Pennies are worth one cent, nickels are worth five, and dimes are worth ten. People of all cultures learn the values of their currency early in life and deal with them on a daily basis. Perhaps that's why it's so surprising that not all coins are worth what they're actually worth.

As any good coin collector knows, some pennies are worth far more than one cent. If a unit of currency is particularly rare, old, or historically significant, it could be worth a lot more currency today. In fact, one coin called the "Flowing Hair dollar," printed in 1794, recently sold for over $10 million at an auction.

Last week, the Professional Coin Grading Service (PCGS) graded the finest known example of an 1849 $20 Mormon (Regular Strike), assigning the coin a ranking of MS62. In 2014, a lower grade of the same coin fetched an astonishing $558,125 at an auction.

The previous record holder of this coin, the "Lilly coin," currently resides in the Smithsonian Museum. David Hall, president of Collectors Universe, recently stated that "this new discovery coin is, in my opinion, superior to the Lilly coin, as such [is] the finest known example of this historically important U.S. gold coin rarity."

"I've been paying attention to 'Territorial' gold for 46 years," he continued, "and this is the finest Mormon $20 I have ever seen."

The coin, an 1849 denomination worth $20, was the first Double Eagle coin struck in the United States for general circulation—beating the U.S. government by a whole year. Coin expert P. Scott Rubin calls the piece "desirable for those wishing a complete collection of this important denomination."

The coin was discovered tucked away in a family's lock box, where it had sat for over half a century. “The million-dollar question is the . . . coin’s value. It is a very important and historical ‘discovery’ coin," said Larry Goldberg, one of the first experts to examine the coin. "It has yet to be determined if the coin will be privately sold, or featured as part of Goldberg’s September auction."