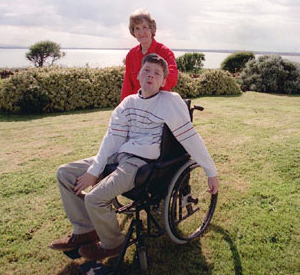 A Mother’s Hope - Story Behind U2 Song 'Miracle Drug'

Christmas is a season of hope, and a time we think of a specific infant, and His mother. I feel this story belongs.

A baby boy was born in a small Irish county hospital in 1965. The birth was a tremendous struggle, and the baby was deprived of oxygen for such a lengthy time that he should not have survived. The resulting brain damage left the child completely paralyzed, with one tiny exception: He had the ability to move his eyes.

The boy’s name was Christopher (Christy). His parents were Bernadette and Joseph Nolan. After Christy’s birth, the family moved to Dublin, to be closer to medical help. The doctors could do nothing. He was diagnosed with severe cerebral palsy, brought about by the extended oxygen depletion.