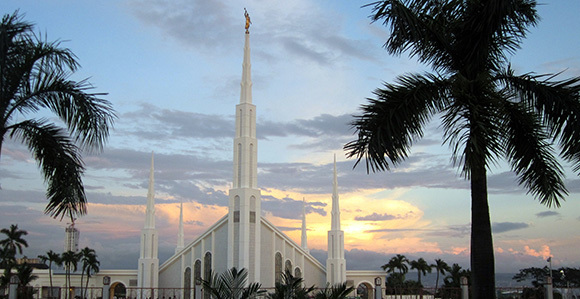 A Temple Christmas Story That Will Melt Your Heart

Jean Mathews and her husband, John, served a mission in the Manila Philippines Temple, where this story took place.

On the day before Christmas, my husband was supervising the [Manila Philippines Temple] baptistry with my help. We were both very busy, but my husband felt a tug on the sleeve of his white suit coat. Looking down—he is 6-feet 4-inches tall and towers over most Filipinos—he saw a little boy who looked about 9. He wasn’t surprised, as many 12-year-olds there are about the size of 8- and 9-year-olds in the States.

This little boy was dressed in worn but clean jeans and a T-shirt and was holding up a tattered piece of paper. John squatted down to look into his big, sad, brown eyes. “How can I help you?” he asked.

“Can I be baptized for my dad?”

“Is he dead?” John asked sympathetically.

“Yes, he died two years ago. My mother told me to be baptized for him today.”

John’s thoughts immediately filled with concern that the boy’s request couldn’t be filled without the necessary information, so he asked, “Do you know his full name and his birthday and where he was born?”

The boy offered the piece of white paper again. “My mother wrote it down on this.”

There, on that worn and soiled fragment of paper carried so carefully in his pocket, was the name of his father and his birth and death dates. Hoping the boy knew any additional information that would be needed, John pointed him to the temple office.

“One of the ladies there will help you. Then come back with the blue slip of paper she will give you, and we will baptize you for your father.”

Because John could not leave his responsibilities in the very busy font, he watched as the boy made his way toward the office. It was an hour before John thought about the boy again and wondered where he was. Shortly thereafter, he felt another tug on his coattail, and the little boy appeared holding a blue slip of paper, which he held out.

We found a very small white jumpsuit for him. We had to roll up the pant legs and sleeves. When it was his turn to step into the font, he paused and announced in great seriousness, as if it were the most important thing to ever happen in his entire life, “I’m getting baptized for my dad.” He had the full attention of everyone there.

After he was immersed, he was given a dry jumpsuit and led to the confirmation room. After he had been confirmed for his father, he approached John again. “Is that everything I need to do for my dad?”

“No, there’s more that needs to be done. I will take the blue name slip and find someone who will do the rest of the ordinances for him if you will wait by the recommend desk. When everything is finished, I will bring this blue paper to you, and you can take it home to give to your mother.”

He nodded and went to sit on one of the couches in the foyer of the temple, where he wearily but patiently waited for two hours.

When the endowment for his father was completed, John found the boy and sat by him, then offered him the blue paper. John looked into those serious brown eyes. “Do you know you just gave your father the most wonderful gift you could ever give anyone?” The boy looked a little confused, so John explained. “You just made it possible for him to see Jesus, and when you and your mother return to the temple, both of you can be sealed to your father, and then you can be a family forever.”

For the first time in that long day, the boy smiled brightly, probably the biggest smile of his entire life. He carefully put the blue paper in his pocket, like a treasure, and slipped off the couch. Looking up at my husband, he whispered, “Thank you.” Then, without looking back, he ran excitedly across the street to the patron house to share the good news with his friends.

We don’t remember that little boy’s name—if we ever knew it—but the look on his face was more than satisfaction, pleasure, or simple happiness; it was a look of gratitude and joy that he could offer such a gift to his father. To us, that look represented the message of the Christmas season—and of the temple, which we will never forget—that we can serve and love those who have gone on ahead and that families can be together forever. 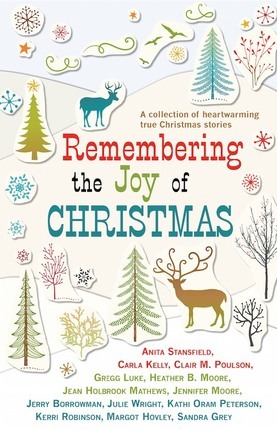 For more touching Christmas stories from beloved authors such as Anita Stansfield, Jerry Borrowman, and Jennifer Moore, check out Remembering the Joy of Christmas, available as an ebook at deseretbook.com.