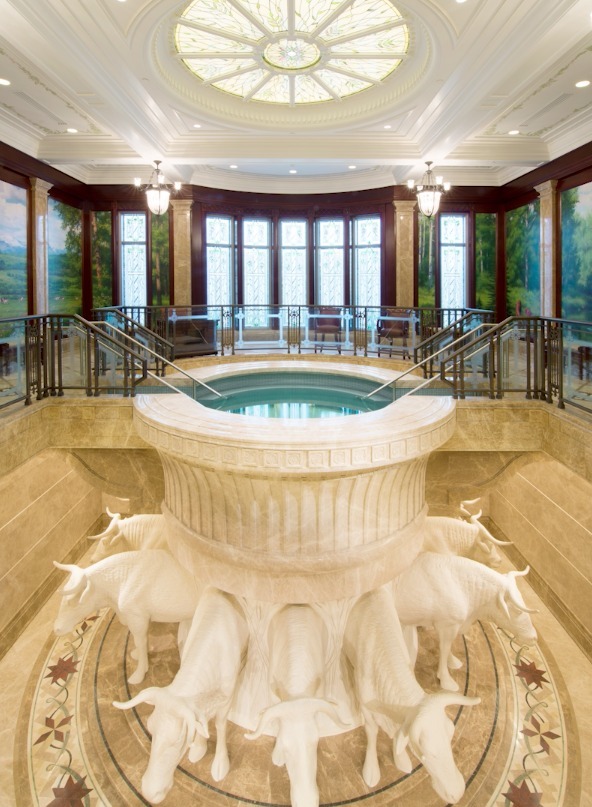 At the entrance, Richards explained how only Latter-day Saints who meet an "expectation of standards" and receive a "temple recommend" from their ecclesiastical leaders will be allowed to enter after the building is dedicated.

Next up was the baptistry, which proved to be one of the more intriguing stops for many tour group members. The Payson Temple's baptistry is an expansive chamber, illuminated by stained-glass windows, with a large baptismal font in the center. The font is perched atop 12 oxen in a circle, patterned after the "molten sea" or "brazen sea" in the ancient Temple of Solomon, according to the Old Testament account in 1 Kings.

Here Richards introduced the LDS belief in earthly ordinances required to return to the presence of God after death. If people die without receiving those ordinances, Latter-day Saints believe their descendants and other temple-going church members can complete the ordinances by proxy for the deceased.

The first of these ordinances is baptism by immersion for the remission of sins. While regular baptisms take place in LDS meetinghouse or any other body of water, so-called "baptisms for the dead" can only take place in temples.

Richards noted that completing a proxy baptism for someone who had died is not necessarily a binding ordinance. He said Latter-day Saints believe those who have died have the opportunity to either accept or reject the ordinance in the afterlife.

As the tour continued through the temple, many in the group commented on the beauty of the structure and the detail in its stained glass and other design elements, including the motif of apple blossoms due to the prominence of apple orchards in the area.