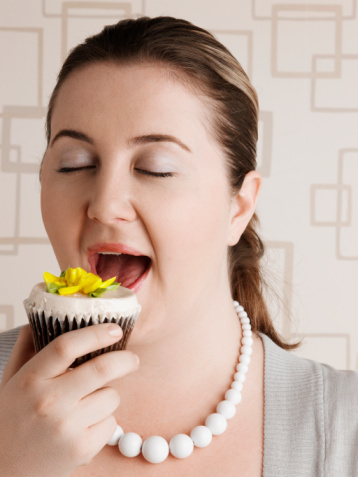 So, last night the mutual kids had a Halloween carnival for the primary kids. I went to pick up my brood at the appointed time and the carnival was still swinging, so I went to find them in the cultural hall. I noticed that some kids were eating chocolate cupcakes. I wanted a chocolate cupcake. In fact, I wanted one so badly that I asked my kids where the cupcakes were. The YM leader in charge of the game that offered cupcakes as prizes overheard me. He held out the tray in my direction. I approached him with my arm outstretched. “I love you,” I murmured as I chose the biggest cupcake on the tray. I wasn’t sure if I was speaking to the YM leader or the cupcake. (I’m still not sure.)

Unwilling to take the time to unwrap the cupcake, I bit the entire top off immediately. It was a mix cake with canned fudge frosting and crunchy technicolored decorative bits. None of this qualifies as real food, but that was hardly the point. As soon as I swallowed the cupcake top I scraped the bottom part of the cupcake out of the wrapper with my teeth. (We were still walking toward the van and I didn’t want to stop for anything logistical.) Then, unwilling to let the remaining chocolaty goodness go to waste, I stuffed the wrapper in my mouth and chewed it all the way home.
Read the rest of this story at segullah.org/blog/