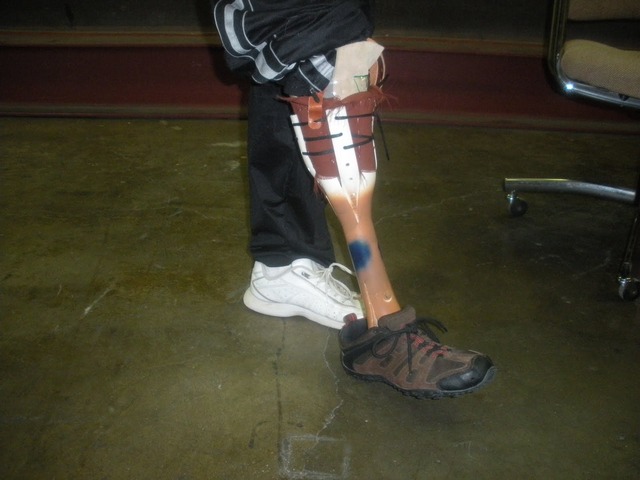 The cost of prosthetic legs is about to get much cheaper.

A group of students at Brigham Young University have designed a below-the-knee prosthetic leg using PVC pipe, polypropylene and a single bolt. Now these students head a nonprofit organization, 2ft Prosthetics (pronounced “two feet”), which manufactures and distributes the plastic limbs for a meager $25 each. The typical below-the-knee prosthetic leg costs begin at $10,000 and can reach as high as $15,000.

Dave Williams is the director and has been with the group since its founding. “It started about two and a half years ago,” he said. “I was president of the BYU Biomedical Engineering Club and we were looking for research and service opportunities.”

Williams said the club came up with the idea to create low-cost, durable prosthetic legs. They sponsored a design competition on campus and applied for grants to begin experimenting. In January 2009, BYU’s Office of Research and Creative Activities awarded the 10 or so students with four out of eight of the grants they applied for, amounting to $6,000.

But raising the money wasn’t the difficult part; preliminary engineering proved quite the challenge.

“We thought we could make it out of bamboo composite,” Williams said. “That didn’t work.”

Within the next year, the club discovered PVC pipe to be easily moldable, durable and cheap. After some trial and error, adding a bolt to eliminate cracking, the design was ready for testing.

The legs are made by baking PVC pipe in a household oven at 250 degrees for several minutes. The pipe is then cut by scissors and molded into leg form.

Bruce Jeppson lost his leg in April of 2002 to a burn. The decision to amputate came after a poor prognosis for recovery. Jeppson spent $14,000 on a prosthetic limb at the time. Around this time last year, he was invited to be the “guinea pig” for 2ft Prosthetics’s clinical trials.

“For price, there’s no comparison,” Jeppson said. “It’s a little more squishy, like walking on a pillow.” But, Jeppson notes, comfort and mobility are the same. Jeppson said he was “glad to be a part” of the clinical trials, and that the people at 2ft Prosthetics were “way helpful” and “way cool.”

The 2ft Prosthetics team recently toured the facilities of Funter Prosthetics in San Salvador, El Salvador, the country’s largest rehabilitation and prosthetics clinic. This gave them a chance to test their legs in other climates. Williams said he saw many amputees in El Salvador crawling on their hands or hobbling on crutches. “People without a leg, they’re seen as broken, no good. This will help them provide for their family.”

2ft Prosthetics is looking to expand by training clinics worldwide in producing their leg design, and perhaps even develop more limbs. They plan to begin distribution in El Salvador and Tonga this summer.

The need is huge. According to the Amputee Coalition of America, there are an estimated 1.7 million amputees in the United States, with lower-limb loss accounting for 97 percent of all dysvascular limb loss discharges. Across the globe, landmines, disease, warfare, natural disasters and accidents destroy hundreds of thousands of limbs each year. Some experts estimate the number of people living with limb loss to be upwards of 3 million globally.