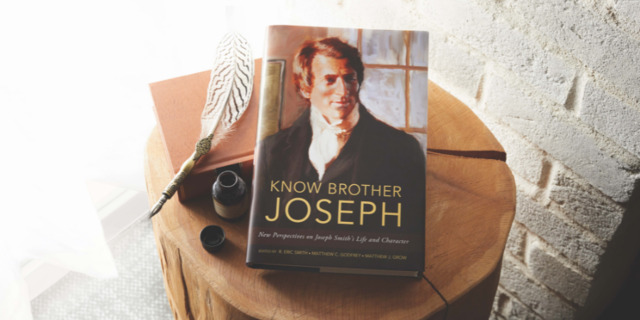 A human being, not a mythic figure—How this new book approaches learning about the Prophet Joseph Smith's life

When the angel Moroni first visited Joseph Smith in 1823, he said that Joseph’s name would be known for good and evil throughout the world. Moroni’s statement has never been more true than in the present. Around the globe, millions of members of The Church of Jesus Christ of Latter-day Saints testify that Joseph was a prophet of God who restored Christ’s Church. As we write this in April 2020, the Church just completed a general conference that celebrated the Restoration. During this conference, the First Presidency and Quorum of the Twelve Apostles released a “Bicentennial Proclamation to the World” that shared their solemn witness of Joseph’s role in the “restoration of the fulness of the gospel of Jesus Christ.”

But, if indications on the internet can be believed, Joseph’s name evokes instant controversy among others who dismiss him as a fraud. A middle ground also exists: those who are curious and want to understand the phenomenon of a nineteenth-century American prophet. This middle ground also has more adherents than ever before; college classes around the world now include Joseph and the early Latter-day Saints in a variety of contexts.

Major historical figures must be understood anew by each generation, who bring new questions and demand fresh perspectives. These ongoing reassessments are most useful when based upon new information that can lead to enhanced understanding. The study of Joseph Smith at this moment benefits from such an increase in information, thanks largely to the Joseph Smith Papers. For the past decade, the three of us have been privileged to work with many other dedicated and talented historians and editors in compiling and publishing all of Joseph’s records.

The sheer volume and complexity of the papers makes reading them a daunting prospect even for Latter-day Saints with a deep interest in Joseph. The core of this problem is that the Joseph Smith Papers are intended for scholars. The meticulous presentation of documents, the extensive footnotes, the in-depth introductions, even the size and weight of the volumes—all of these indicate that these are substantial volumes that demand to be taken seriously by anyone researching Joseph. For Latter-day Saints, it can be difficult to wade through the volumes and synthesize the new information. Indeed, it will take a generation (likely more!) of scholars, believers, and detractors to digest and analyze this material.

This book is an attempt to bring insights drawn from the Joseph Smith Papers—and other reputable sources about Joseph and the early Church—to a broader audience. We asked over forty individuals who have studied Joseph to write brief essays. The authors come from a variety of backgrounds—many are historians, while others are editors, writers, and teachers. We envision the result as something like a college course on Joseph and the early Church, with a different professor each day. Most academics are used to writing articles of thirty or forty pages, usually more than 10,000 words. Here, we asked each author to teach about Joseph using only about 1,500 words. Writing concisely, in a format intended for a broader audience, leads hopefully to a focused and accessible approach. We also asked the authors to consider how studying Joseph’s life and papers has influenced their own lives.

► You may also like: ‘God is my friend’: What we can learn from how Joseph Smith dealt with adversity

We’ve spent the past decade reading Joseph’s mail, scrutinizing his journal, studying his revelations, puzzling over his legal and financial worlds. We have listened to the thoughts of his friends and pondered the words of his enemies. We have followed him seemingly every step from the Palmyra of his youth to Carthage. We are among the small group of individuals who have read every word in the Joseph Smith Papers print edition—most of them many times! For us, it is a great privilege to spend our professional lives with Joseph.

Through our work, we have been able to get to know Joseph as a human being—not as a mythic figure. We have been with him in his triumphs and his failures, his joys and his sorrows. Knowing him as a person has given us even more appreciation for him as a prophet, for how the Lord used him as the instrument to restore the gospel of Jesus Christ. We hope that in these pages, you will also gain new insights into and appreciation for Brother Joseph.

This collection of short essays will help close this gap and bring insights into Joseph to Latter-day Saints, both those who are struggling with questions about Joseph and those who simply want to understand the founding Prophet of the Restoration better. These essays look at Joseph Smith's life, character, personality, and relationships with others. Know Brother Joseph, is an accessible and faith-promoting look at Joseph Smith, his life, and its relevance to us in our daily walk. Available now at Deseret Book stores and at DeseretBook.com.