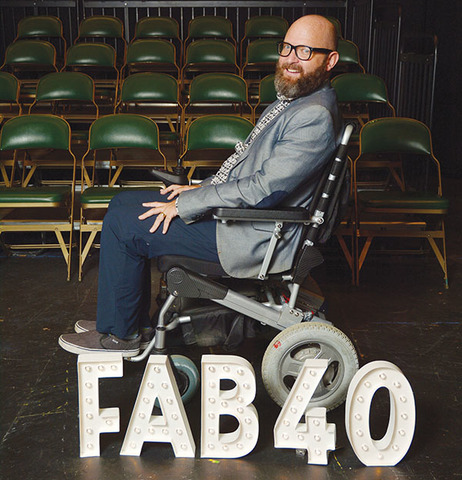 Actor from Church Bible Videos Shares His Battle with ALS: "For Now, We Are Living Our Lives”

“This past year has been full of kindnesses,” says Christopher Clark, who was diagnosed with Lou Gehrig's disease. “Whatever people are good at, they’ve been helping us with that one thing. If I could turn back time when I was more able, I would want to do more for others.”

His characteristic charm and humor set the tone for our candid conversation about his theater career, his portrayal of the apostle Paul, and his diagnosis nearly a year ago. Before we launch into our official Q&A, he shows me 100 paper cranes sitting wheelchair-height beside him.

“A friend brought these to me from Japan, and apparently 1,000 paper cranes means good luck,” Christopher says as he holds some of the cranes with his better hand. “But he could only get 100 paper cranes, so does that mean I only have 10 percent of hope? I guess any hope is better than no hope, right?”

I quickly learn what Instagram has already told me — Christopher (also known as Chris and Topher) is comfortable talking about the discomfort of Lou Gehrig’s disease and its inevitable outcome. And while that’s true, he mostly wants to talk about now.

Chris is in his 15th year as a theater professor at UVU. He’s directing “Betty Blue Eyes” at Hale Center Theater Orem. He’s producing “Joseph and the Amazing Technicolor Dreamcoat” for Sundance Summer Theater. He has five ambitious children (ages 9 to 18) all living at home. His comedian-actress wife just went viral with her second “Chatbooks” video. And he is taking his 12th annual trip to England with students this summer — “God willing,” he adds.