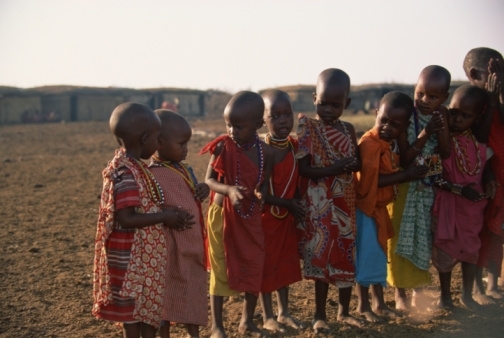 On August 28, 2010, more than seven months before the premiere of the irreverent Book of Mormon musical that swept the Tony Awards over the weekend, more than 10,000 African youth staged their own productions of events in the Book of Mormon. Participants came from Nigeria, Benin, Ivory Coast, Liberia, Sierra Leone, Togo, and Ghana. Based on the theme of “A Mighty Change,” these productions had the primary purpose of increasing each participant’s testimony of Jesus Christ and the Book of Mormon.

These youth productions are only one example of the positive growth of the Church and the real effects of missionary work and the gospel in the African continent. African Saints, like those all over the world, find peace, joy and hope through the restored gospel.

In an official statement, the Church said of the Book of Mormon musical that “the production may attempt to entertain audiences for an evening, but the Book of Mormon as a volume of scripture will change people's lives forever by bringing them closer to Christ.” Many Africans agree, since the Church has branches or wards in over two dozen African countries.

Jay Bostwick, a returned missionary who served in the Kenya Nairobi Mission, said the people of Kenya are very Christian, but the Church offers them something more. “As far as a gospel that you can think about  . . . and ask questions, I think we were kind of unique,” Bostwick said.

A returned missionary who served in South Africa, Maren Tenney, remembered teaching a man who struggled to follow the Word of Wisdom. She and her companion found him one day contemplating leaving his family. Testifying about the gospel and asking him questions, Tenney and her companion saw him change his heart and stay with his family.

“By the end of our conversation there was a soft spirit in the room. . . . The gospel had put an eternal light on things,” Tenney said.

Austin Kinghorn, who returned in 2008 from his mission to Cape Verde, shared a similar memory. He said encouraging people to be legally married was often a challenge. One particular couple had an 18-year-old daughter who was already a member. The couple came to church for a while but kept pushing off marriage until a gospel truth hit home.

“They decided they wanted to be an eternal family and join the Church,” Kinghorn said. The couple married on a Friday and were baptized the next day.

Certainly much of the news about Africa focuses on the challenges so many people there face, including violence, poverty and illness. Bostwick pointed out that the problems people face in Africa are faced all over the world, but the gospel can help with all those challenges no matter where people live.

“Just like anything, knowing that there’s a God out there who loves you can give you something to hope for,” Bostwick said.

Having lived in Africa for two years, many returned missionaries see the gospel as the answer. Eric Collyer, who also served in Kenya, said, “Honestly, the longer that I spent in Africa the more I realized the gospel is really the perfect solution.”

Uniting families and keeping them together is only one blessing of the gospel to African Saints. “I think the people are at peace when they have the truth,” Tenney said. “I saw a lot of joy, even though there was poverty.”

Kinghorn talked with reverence about the generosity of African Saints he met. “A lot of times we tend to just look out for ourselves,” he said. “The Church allowed people to look beyond themselves and to help those that were struggling, that were worse off.”

Hope. That was the one word that all four of these missionaries could barely contain. They see African Saints as full of hope.

Optimistic about the Church in Africa, Collyer said, “It’s really nice to be able to teach them the gospel and just give them something to hope for. They’re just that much happier knowing they’ve received the truth.”