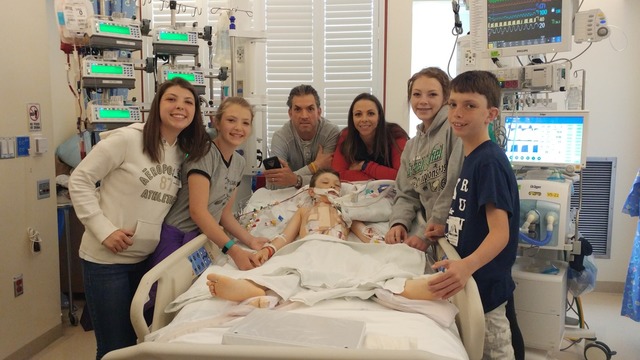 After 4 Heart Transplants, LDS Family Continues to Inspire and Bless

The Bingham children, all under age 18, have undergone four heart transplants in the past 12 years. We are amazed by this family's faith, hope, and resilience amidst such a difficult trial.

Valentine’s Day 2018 will mark the five-year anniversary of 14-year-old Lindsey Bingham’s heart transplant, a heart she waited eight months for while being sustained by a Berlin Heart, a miniature, external pump. But that’s just one part of the miraculous story of the Jason and Stacy Bingham family.

With four heart transplants in their family over the past 12 years, the Binghams, members of The Church of Jesus Christ of Latter-day Saints, have learned to be grateful for each day they've been given.

Lindsey, along with her older sister Sierra, 18, and younger brother Gage, 9, have dilated cardiomyopathy, a condition where the heart muscle enlarges and can’t contract normally to pump blood to the rest of the body, causing heart failure. Each of the three children has undergone heart transplants — Sierra has had two.

“You hear stories of pioneers who were pushing their cart and they looked back and couldn’t figure out who was pushing it — I’ve felt that way sometimes,” said Stacy Bingham, their mother. “I don’t know how I had the strength to get through some of the stuff we did, but there was strength coming from somewhere.”

The family’s other two children, Megan, 16, and Hunter, 11, also have markers and are at risk for the disease, but their heart function has been normal so far.

The Binghams' deeply rooted faith and optimism have held them together as they’ve traveled back and forth from their home in Haines, Oregon, to Lucile Packard Children’s Hospital Stanford in Palo Alto, California, several times a year for more than a decade.