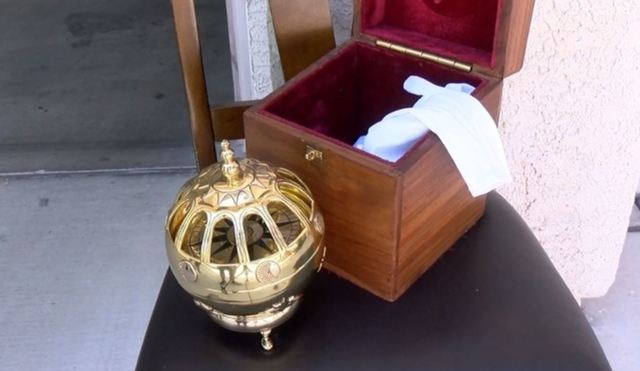 After Car Burglary, Man Wakes Up to Find a Liahona Replica on His Front Lawn

A man woke up to find a Liahona in his front yard. Though it might sound more like the opening to a joke than a headline, there's little funny and much inspiring about recent news in Las Vegas involving a car burglary.

Earlier this week, Khai Vu woke up to find his car broken into outside his Summerlin home. He also discovered a wooden box with a gold lock. Inside that box was a beautiful golden replica of the Liahona.

“When I first saw it, I thought it was an urn,” Vu told News 3 Las Vegas. Vu is convinced the burglar who broke into his car probably dumped the item there, and Vu is determined to get the Liahona replica back to its rightful owner.

News 3 Las Vegas wanted to know more about this "divine instrument" from the Book of Mormon, so they talked to Kevin Lemley, the manager of Deseret Book in Centennial Hills, where the Liahona was sold years ago.

“In the Book of Mormon, there’s a prophet named Lehi, who the Lord commands to leave Jerusalem with his family and to help him find his way, they give him a round ball which is a Liahona,” said Kevin Lemley. “For someone who's maybe going through a rough time or a hard time, that's what it would serve for: a reminder. If I turn to Christ, I can make it through this okay."

Read the rest of this story at news3lv.com