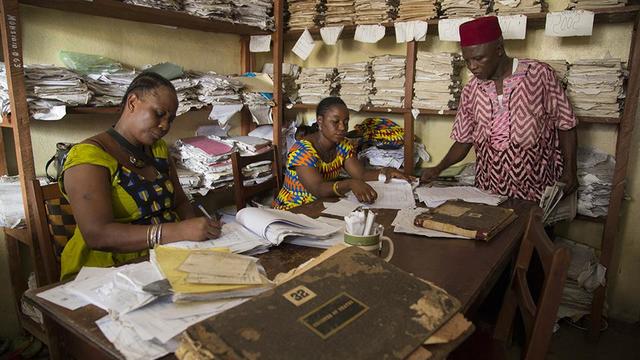 “To have a project where we are trying to make sure we capture and retain the records that do exist is a remarkable undertaking and necessary,” says Elder David A. Bednar of the Quorum of the Twelve Apostles, whose assignments include ministering to the African people. “All over the earth we make available our records, and they strengthen communities because they have that sense of place, that sense of person — a place of history.”

Years of civil war and a deadly outbreak of the hemorrhagic fever virus, Ebola, left Sierra Leone devastated and its infrastructure broken. A year after the declared end of the deadly scourge, dysfunction spills over into virtually every aspect of life in this poverty-stricken West African country, including the record preservation of a population.

At the Office of the Deputy Chief Registrar of Birth and Deaths in Freetown, Sierra Leone, paper records dating back to the early 1800s are disintegrating at an alarming rate due to poor storage conditions, heat, humidity and frequent handling.

“Sometimes we have only one or two days with lights … per week,” says deputy chief registrar of birth and death records, Richard Konie. “So that is very difficult for us.”

The deputy chief says he and his staff often pool money just to keep the lights on those few days a week, in dank, stiflingly hot rooms where all work is done with pen and paper — the same rooms where all the country’s records have been stored for decades on open makeshift shelves that sag under the volume of weight.

“When I saw these records for the first time, it was devastating,” recalls Thierry Mutombo, project manager in charge of record access for FamilySearch International of The Church of Jesus Christ of Latter-day Saints. “I had my heart broken because of the conditions of how these records are kept and the way that the people are working here, giving the best of themselves to preserve what they can for people and families of Sierra Leone.”