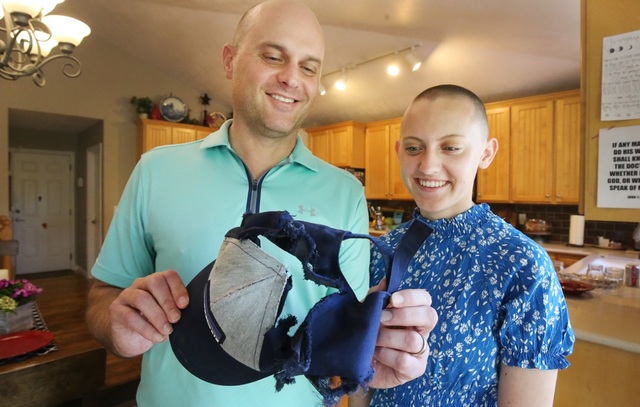 After Father, Daughter Struck by Lightning at Youth Camp, Family Recalls Miracles That Kept Them Alive

"All the miracles along the way, all the people that jumped in, all the things that went right that could've gone wrong. It's incredibly faith confirming, faith increasing, and the hard part, as I've mentioned, the struggle right now is, 'Why am I so lucky?'" Scott Robinson said.

After getting back from a trip to Europe with her family and receiving a perfect ACT score, little did Chloë Robinson know that lightning was about to strike.

"I didn't know what had happened. I honestly thought I was dreaming because I didn't recognize where I was. And I was lying down so I thought it must be, 'I'm making something up,'" Chloë recalled.

On June 20, the 17-year-old had just had a great day at youth conference with about 200 other members of The Church of Jesus Christ of Latter-day Saints at the Territorial Statehouse State Park museum.

It started like any family trip. They drove to Fillmore, went swimming, ate dinner and played pioneer games with the group. It rained intermittently throughout the day, but the skies had seemed to clear by 8 p.m. Chloë was playing a game of croquet with her dad, Scott Robinson, under a large tree when the storm began.

"It was just the most immense flash and the clap and just a big sonic boom. It was really a sound I'd never heard before," Dave Kotter, a neighbor of the Robinsons, remembered. "I said out loud: 'That was close.'"