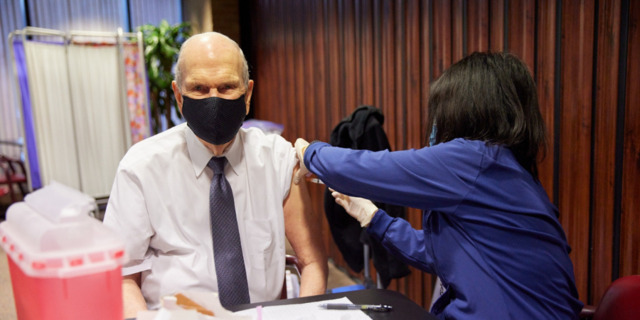 byNewsroom of The Church of Jesus Christ of Latter-day Saints | Jan. 19, 2021

Eight senior leaders of The Church of Jesus Christ of Latter-day Saints received the first dose of a COVID-19 vaccine Tuesday morning in Salt Lake City. These leaders qualify for the vaccine in Utah because they are over the age of 70. Health care workers, first responders, and other high-priority recipients in the state had the opportunity to be vaccinated in recent weeks.

The First Presidency released the following statement Tuesday about the importance of vaccinations and immunization against preventable diseases:

In word and deed, The Church of Jesus Christ of Latter-day Saints has supported vaccinations for generations. As a prominent component of our humanitarian efforts, the Church has funded, distributed and administered life-saving vaccines throughout the world. Vaccinations have helped curb or eliminate devastating communicable diseases, such as polio, diphtheria, tetanus, smallpox and measles. Vaccinations administered by competent medical professionals protect health and preserve life.

As this pandemic spread across the world, the Church immediately canceled meetings, closed temples, and restricted other activities because of our desire to be good global citizens and do our part to fight the pandemic.

Now, COVID-19 vaccines that many have worked, prayed, and fasted for are being developed, and some are being provided. Under the guidelines issued by local health officials, vaccinations were first offered to health care workers, first responders, and other high-priority recipients. Because of their age, Senior Church leaders over 70 now welcome the opportunity to be vaccinated.

As appropriate opportunities become available, the Church urges its members, employees and missionaries to be good global citizens and help quell the pandemic by safeguarding themselves and others through immunization. Individuals are responsible to make their own decisions about vaccination. In making that determination, we recommend that, where possible, they counsel with a competent medical professional about their personal circumstances and needs.

The Church’s Longstanding Support of Immunization

Notable success stories of late include the elimination of diseases throughout Africa. In 2019, Latter-day Saint Charities and partners such as UNICEF USA and Kiwanis International helped eliminate maternal and neonatal tetanus in Chad and the Democratic Republic of the Congo. Late last year, thanks to UNICEF and partners such as Latter-day Saint Charities, Africa eradicated wild poliovirus. And in response to a measles epidemic in Chad in 2019, UNICEF and its partners helped vaccinate 653,535 children between the ages of six months and nine years over a one-week period.

“I’m glad our turn has come to have this vaccination,” President Oaks said Tuesday morning. “We’re very hopeful that the general vaccination of the population will help us get ahead of this awful pandemic. It’s hopeful, like the light at the end of the tunnel. There is relief and appreciation involved for those who have invented the vaccine and for those who have caused it to be generally available on a sensible priority system.”