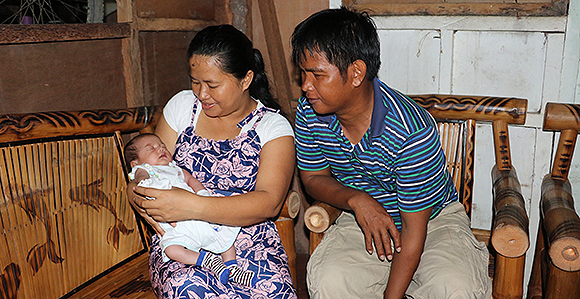 After Having Her Only Child Pulled from Her Arms and Killed in Typhoon, LDS Mother Finds Healing in Temple

“I cannot explain the happiness,”Analyn Esperas said. The temple, she said, “washed away the nightmares of my life.”

In the days after a horrific storm hit Tacloban, Philippines, Gemmer Esperas walked along an altered landscape—where houses had been ripped from their foundations and a thick coat of black mud covered the community—and looked for the body of his only child.

Annammer Esperas, 6, was home with her mother, Analyn Esperas, when Typhoon Haiyan struck her city on November 8, 2013.

As the water came, the mother and daughter were carried into a rice field. Analyn tried in vain to hold the little girl as the waves and the wind beat the earth. Hours later, she would lie on the top of a tin roof knowing her only child had been carried away by the storm surge.

Gemmer returned from work as a security guard to discover what Haiyan had claimed—his daughter, his home, his job.

First he found and buried his daughter, then he gathered abandoned sheets of corrugated metal and built a new home. But the gaps in the metal did not protect his wife from the wind or the rain. The couple could not sleep.

Everything changed when a counselor in the bishopric of their ward, Joy Operio, found the Esperases. “Go to the church for shelter,” he told them. That night in the LDS meetinghouse they slept for the first time since their daughter’s death. On that night, recovery for the Esperases began.

Lead image from lds.org of the Esperases with their new son