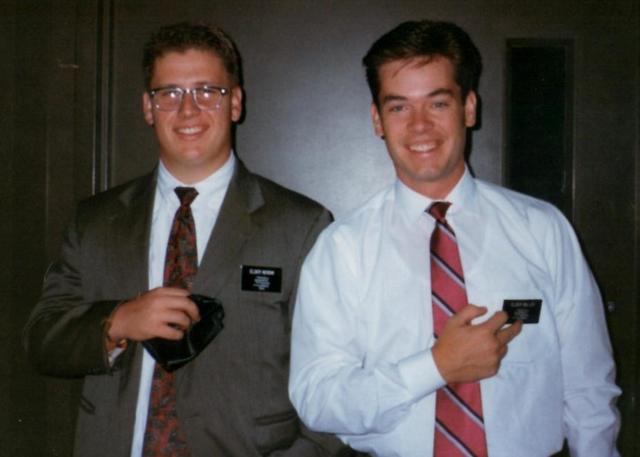 After Latter-day Saint Changes the Life of a Missionary Running Away from the MTC, the 2 Reunite 26 Years Later

Twenty-six years ago, in what Matt Nerdin terms "a moment of self-doubt and frustration," he ran away from the Provo Missionary Training Center in the early hours of the morning. After reaching the freeway, Nerdin had one "scary, prayer-filled" hitchhiking encounter before receiving a lift from a young Latter-day Saint father.

"After learning I had gone AWOL from the MTC, and then learning I had been assigned to serve in Guatemala, he seemed a bit shocked, and then informed me that he’d recently also been a missionary in Guatemala. Since I had no schedule for the day, he invited me to tour the radio station where he worked, then he took the rest of the day off and took me to meet his wife and child, showed me pictures of his mission in Guatemala and talked favorably about his time there, eventually persuading me to return to the MTC and see if they’d let me come back. Surprisingly, they did."

But this man's ministering to this young missionary didn't stop there. Nerdin explains, "He showed up at the airport to see me off. I owe this man a lot, in particular, my firm belief that God cares enough about me to send a very specific angel to watch over me in a moment where I wasn’t sure he cared. Sadly, I lost his contact information a short time later and have never been able to truly thank him for being on God’s errand that day."

Now, 26 years later, Nerdin felt he needed to thank this man who had given him so much during a time his faith was wavering. But Nerdin didn't even know the man's name, so he took to Facebook, asking for help identifying this "angel" in his life.

Within 36 hours, Nerdin not only learned the name of his benefactor, Paul Miller, the two were able to reconnect and talk together over the phone. "Thank you all from the bottom of my heart for making that possible!! What a great Christmas present!" Nerdin writes.

In another post, Nerdin adds, "It was truly a tender mercy and a wonderful Christmas present from all of you to be able to reconnect with Paul Miller, the man who had felt inspired to stop and help me that early morning so many years ago . . . and who then pretty much stopped his day for a complete stranger . . . seeing a young man struggling and putting aside his life to help me put mine back in order."