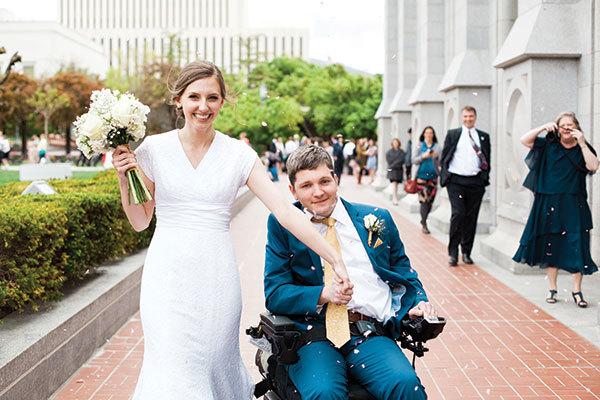 After a Near-Death Accident 6 Days Before Their Wedding, LDS Couple Fights to Finally Build a Life Together

Just six days before their wedding, Audrey Buckley received a call that would change her entire future. Her future husband was in the hospital in a coma. “I had a lot of fears—whether or not Jared was going to remember me, what he was going to be like, if he was ever going to talk again, or if he was even going to wake up at all,” Audrey shares.

Audrey Buckley (now Workman) planned for April 25, 2015, to be the day she would meet her future in-laws for the first time, attend her bridal shower and dream of her wedding in one week.

Instead, Audrey spent the day getting to know her future in-laws in a hospital room while her fiancé laid in a coma, something that became the norm for the next 2 ½ months.

Audrey first met Jared Workman in 2010 at BYU while playing night games. Over the next few years the couple dated on and off until Audrey decided to serve an LDS mission. Before she put on her missionary tag, Jared proposed.

“I told him yes because I had been waiting three years before that to marry him,” Audrey says. “But I said, ‘I’m still going on a mission.’”

Audrey spent the next 18 months in the Philippines. Jared spent the next 18 months faithfully writing Audrey every week and counting down the days until her return with a paper chain in his office. When the paper rings ran out, Jared and Audrey replaced them with a real ring and an official engagement the weekend she returned home from her mission.