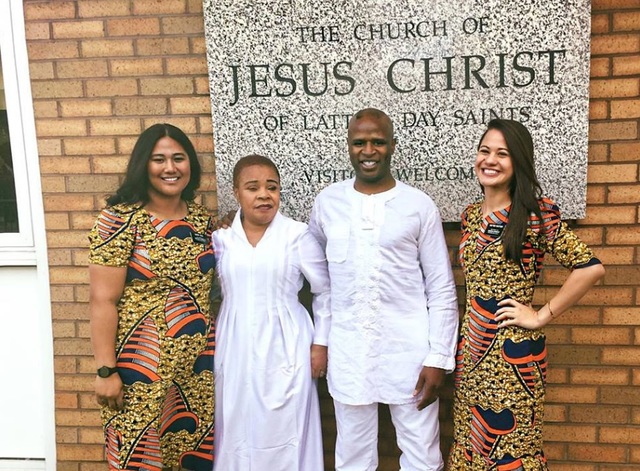 Alex Boyé Baptizes Mother: I've Been Waiting for This Moment for 20 Years

When he was 11 years old, Alex Boyé's mother told him she was returning to Nigeria for three weeks. "It turned out she was there for eight years," he says in his "I'm a Mormon" video.

The foster family he was living with eventually kicked him out, leaving him to wander the streets of London, homeless at just 16 years old.

"The only help I got was when I opened up and said 'Heavenly Father, I can't do this on my own,'" he recalls. It was during that time Boyé discovered the gospel, was baptized into the Church, and found hope in the gospel.

And even with the gospel, and a music career that would take off a few years later, he still felt abandoned by his family.

"It was tough. I had a lot of despair and depression. I felt like all the people I had loved rejected me in some way. It wasn't until years later that I learned the reason my mom actually left, and then I cried," Boyé shares on "Hour of Power."  As a young boy, Boyé hadn't realized his mother worked three jobs just to make enough to get by. She would walk the tracks of the underground "with all the rats and everything" picking up trash from 9 in the evening to 3 in the morning for one of her jobs.

When his mother eventually left for Nigeria, it was to be with a man she was dating. "She said, 'Well I need to come back to my son,' and he said, 'You have to make a choice. Either you go with me or your son.'" But Boyé's mother didn't forget him. She eventually put him in a boarding school and sent him money to support him.

Through his journey in the Church, Boyé has come to realize how much his mother sacrificed for him. By being able to see with a better perspective and love more how God loves us, Boyé was able to forgive and love his mom for all she's done in his life. "I look back now and realize she sacrificed everything for me," he says now.

"I look at Jesus Christ, the trials that he went through, and here I am complaining about mine. What we realize is that God's version of good is different than ours. You have to go through it, you know what I mean? We're just like, 'Just give me ice cream, that's good,' but I tell you I am grateful for those trials. I am grateful for those times when I was 16 walking the streets of London eating from the trash, I'm grateful for all of those experiences 'cause sometimes when I meet friends or people who are about to give up and I'm like, 'Let me tell you man, all this that you are going through right now, you are going to use it to bless other people.' Sometimes it's not for you."

However, the gospel was able to do so much more than allow Boyé merely to forgive his mother—now it has helped them grow closer, as Boye recently performed his mother's baptism this Saturday in London.

About this experience, Boyé posted on Facebook, "Have been waiting for this moment for 20 years. Cried like a baby. BEST. DAY. Ever!"