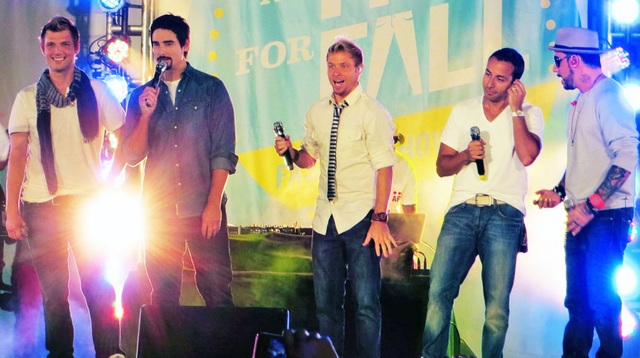 Alex Boyé Shares When the Backstreet Boys Opened for His Band

Before Alex Boyé was a YouTube star or a soloist with the Mormon Tabernacle Choir, did you know he was the lead singer of a boy band in the ‘90s?

Boyé grew up in England and joined the Church when he was 16 years old. He served a mission in Bristol, England, and then formed and became lead singer for a boy band called Awesome in 1995. They landed a five-album recording contract with Universal Records and performed with several famous artists, including Bryan Adams, George Michael, Simon and Garfunkel, MC Hammer, and the Backstreet Boys.

► You'll also like: Howie Mandel Raves About Alex Boye on "America's Got Talent"

In fact, the Backstreet Boys were relatively unknown when they opened for Boyé's band in England.

With all the recent buzz about the Backstreet Boys, we took some time to chat with Boyé about his impressions of the group. About hearing this group for the first time, Boyé says:

"I met the Backstreet Boys for the first time in Cardiff, Wales. We were on the same bill. No one knew who they were yet. I remember hearing them do a soundcheck. My group was so impressed with them because each singer sounded amazing, which was very rare in the boyband days.

"Usually there would be only one great singer and they would usually be the lead. They came with a huge entourage and we could never actually talk to them the first few times we saw them, but later on we would recognize each other at other shows and we would chat and hang out with them."

► You'll also like: Alex Boye Creates Music Video "We All Bleed the Same"

Though Boyé never had a chance to talk with the Backstreet Boys about his faith, he did recall that one of their touring backup dancers was LDS.

He also remembers when A.J. tried to hit on his girlfriend.

But his later interactions with members of the band were far more pleasant:

"I bumped into Brian Litrell at a gospel music conference in Colorado about five years ago and he remembered my band. I admire him a lot. He's a devout Christian and has very strong Christian morals."