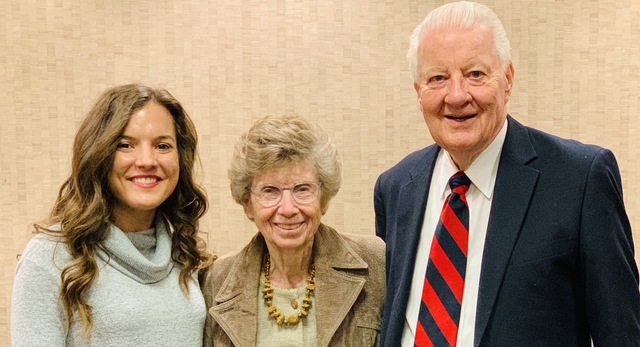 All In Podcast: What the Tongan People Taught the Grobergs About Serving Others Regardless of Religion

When emeritus General Authority Seventy Elder John H. Groberg was just a young man from a farming community in Idaho, he was called to be a missionary in Tonga. Little did he know at the time that he would later write his own book about his missionary experiences, which would eventually be turned into a successful film, The Other Side of Heaven. The movie’s sequel, Fire of Faith tells the story of Elder Groberg’s return to Tonga with his wife, Jean, and his children after being called as mission president. On this week’s episode, All In host Morgan Jones talks with Elder and Sister Groberg about the spiritual lessons they learned from the Tongan people. They specifically discuss the way they were ministered unto by the entire Tongan nation when their new baby became sick.

Morgan Jones: Another thing that I love that the movie portrayed is the way that the entire Tongan community, regardless of their faith, rallied around your family during this time and I think that’s such a beautiful example. I think sometimes we do ourselves such a disservice when we place up walls based on faith or whatever, these divisions that keep us from serving, and I think that that example in the film of the Tongan people’s love in rallying around your family is so beautiful. What can we learn about that experience? What can we learn from that experience about serving people and loving people?

Jean Groberg: Well that’s what Christ asked us to do. Love one another as His example of loving us. The Polynesian people, it’s just part of their DNA almost. It’s just their culture and their putting that into practice. It’s a great heritage and we all need to try that and put it into practice.

John Groberg: And I think it’s just more than our family. It’s kind of just their way of life. If there’s a Wesleyan Church being built, the members of the Church of Jesus Christ of Latter-day Saints, the Catholics and others help. If we’re building a Church, they’ll help. If someone is sick here, they’ll help. I mean there is tension between religions as there is in most places. But that is superseded by their desire to be helpful. And so I think there is a great, great lesson for us all to learn. I think President Nelson and the church leaders today are saying that same thing, ‘Hey if people need help, it doesn’t matter what religion they are. We’re going to help them.’ And I think that’s really part of the Tongan culture, part of the Polynesian culture, we’re here to help. I think it goes back to what I said earlier that I was just raised that way. That’s why we are here on Earth, it’s to help. And I really love the way President Monson of course was just so willing to help whenever we had challenges, like they had hurricanes or different things. Boy, he was right on, ‘What can we do to help?’ as a Church. Our chapels are so often used when there’s a hurricane, when there’s earthquakes, or things of that nature. A lot of the other structures are blown away but the Church is there and just, don’t even hesitate. Just invite them to come in. I think that’s my feeling anyway. That’s one lesson we can all learn not only from the Tongan people but from our own leaders and from the Savior himself.