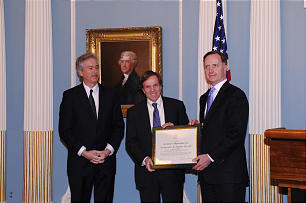 The U.S. Department of State presented on April 21 in Washington D.C. the Diplomacy for Human Rights Award to R. Stephen Beecroft, U.S. Ambassador to Jordan. The award honors Brother Beecroft's service in furthering human rights and democracy in Jordan, where he has been serving as ambassador since August 2008.

William Burns, Under Secretary of State for Political Affairs, and Michael H. Posner, Assistant Secretary of State for Democracy, Human Rights, and Labor, presented the stone plaque which recognizes Brother Beecroft's "extraordinary commitment to defending human rights and advancing democratic principles of government." As the U.S. Chief of Mission in Jordan, Brother Beecroft has contributed to the progress of individual human rights cases and has also encouraged systemic reform.

But he remains humble about his efforts. In an interview after the ceremony, he noted the contributions of others as well.