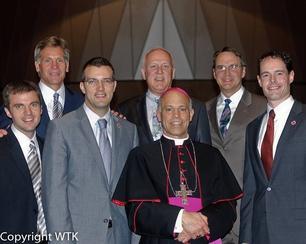 The uniting of the LDS and Roman Catholic churches to help the American Red Cross raise blood units in the Bay Area is a unique first-time occasion.

The Interfaith Community Blood Drive is so unique, in fact, that Jeff Meyer, the CEO of Red Cross operations in northern California, said he cannot remember another occasion in which the two churches and other denominations in the region have ever before combined for such an enterprise.

Though the effort provided a mere portion of the 6 million units of blood the American Red Cross collects annually, Meyer had been touched by the seven-month concordance of the two religions to assist in the temporal saving of lives.

"It's amazing to me to see this is actually occurring," Meyer said. "When I'm in a Catholic church seeing an LDS symphony perform and then I'm seeing a Catholic cardinal with elders from the LDS Church sitting next to him, it hit home to me, wondering where else this sort of thing would occur. It blew me away that other differences would be put aside for the common goal of saving lives."