The scriptures are stocked with examples of how disciples, apostles, and missionaries overcome the hardship that is accompanied with sharing the restored gospel of Jesus Christ. From Peter and John to Alma and Amulek all the way to our present day, nobody has been or will be immune to the trouble that comes along with the joy and fulfillment of preaching the good word. There is an opposition in all things, but the opposition that disciples face doesn’t have to overshadow the miracles that are wrought within the work.

This same principle applied to those who went out among surrounding nations shortly after the church was restored under the Prophet Joseph Smith. After spending some time establishing the church in America, President Brigham Young received revelation after Smith's martyrdom to send out several of his cohorts to help fulfill the commandment to spread the gospel to all the world. Here are some examples of missionaries who served in differing countries at this time and some lessons learned from these individuals.

Sacrifice is always involved in missionary work and Dan Jones was a great role model of it. Jones worked as a boat captain after immigrating to the United States from Wales and would often transport Latter-day Saints via the Mississippi River. Jones was a convert himself and received a call to serve a mission in Wales shortly after Heber C. Kimball opened missionary work across the British nation. Jones served two missions in Wales, his first being seven years from 1845-1852 and his second from 1852-1856. Jones was able to bring his wife along with him for his first mission, but was unable to do so for the latter visit to his homeland.

Missionaries who are called to serve in the Lord’s vineyard today are typically sent into the field to serve for a period of 18-24 months, with mission presidents and their spouses called to serve for three years. However, Jones was called to serve two missions for 11 years total, four years without the company of his wife. Jones was able to help in converting many saints across Wales who would later travel across the Atlantic and join the saints in America with his sacrifice. As one famous hymn says, “sacrifice brings forth the blessings of heaven.”

Opposition is something that will always be woven into missionary work. This is something every returned missionary can attest to. Elder Stevenson faced much of this when assigned to serve a mission in his native country of Gibraltar, which is a British territory at the bottom end of Spain. Stevenson was born in Gibraltar so it wasn’t really a problem for him to gain access to re-enter. His companion Nathan Porter, however, was not a native to Gibraltar. Porter was granted access to the country for fifteen days and was shipped out of Gibraltar when his permit was expired. A renewal for Porter’s permit was out of the question.

Stevenson, now without a companion, was still determined to preach the gospel to the people of Gibraltar by himself. As opposed to current missionaries who preach the gospel in groups of two or three, Stevenson tried to plant the church in Gibraltar sod without companionship. Stevenson noted how much resistance there was from the government and clergy officials. So much so that he was held “under guard, saying that [his] religion was one that could not be tolerated in [Gibraltar]. . . . For the first time in [his] life [he] was marched into the guard house as a prisoner,” Stevenson stated in a journal. Even after Stevenson was able to form a branch of ten converts, many of them “were sent away to Eastern Europe to fight in the Crimean War.” Despite all of this, Stevenson was able to baptize many converts while teaching the gospel in Gibraltar, including one woman who helped take care of him when he was a child. Opposition is something to be expected when sharing Christ’s restored teachings, especially in the latter days. It shouldn’t stop us from doing so.

Elder Orson Spencer left to grow the Church in Germany (formerly Prussia) in 1852. He was only there a year because after finding out what Spencer and his companion (Jacob Houtz) were there to do, German police gave them this declaration: “You, Orson Spencer and Jacob Houtz, are hereby commanded to depart out of this kingdom tomorrow morning, under the penalty of transportation; and you are also forbidden ever to return to this kingdom hereafter, under the penalty of being transported.”

Despite this exile of Spencer from preaching the gospel to the Germans Spencer had the gospel truth, knew he had done all he could with what was given him and knew what he had to do to claim the blessings in store for him. Said he: “Our religion is good, and pure, and faultless, having come from the holy heavens; and having spoken against that, [they] will have power to answer it to Him, who revealed it from the Heavens for the blessing and salvation of all those who should receive it.”

It’s important to keep in mind that no matter what happens and no matter what others ultimately choose to do, Latter-day Saints still have the gospel of Jesus Christ and have the eternal truths given to them. If nobody else will accept it, at least saints can choose to choose Christ every day. That includes choosing to share the gospel with those around us. 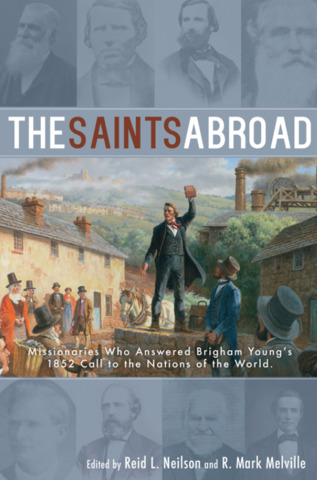 Get more fascinating insight into our Church history in The Saints Abroad.

The Saints Abroad is a compilation of multiple missionaries in the early days of the church who were sent out to vast countries across the world in an attempt to gather scattered Israel. It gives readers an insight to what it was like for these eight individuals to try to establish the church in other nations by providing an inside look into journal entries from these men. Entries include stories of hardship, miracles, conversion and faith.