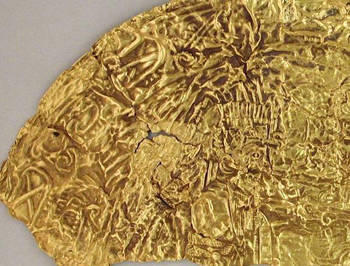 Archaeologists have know for about a century that gold plates with carved writing have been found in Mesoamerica, yet it is still not common knowledge outside their discipline.

It all began with Edward Herbert Thompson.

When he was excavating at Chichén Itzá near the turn of the 20th century, he was enthralled with the sacrificial cenote. Unlike other archaeologists, he believed the Spanish Priest Diego de Landa’s account of offerings at this location. Determined to find them, he began to dredge it in 1904, donning a diving suit to search the muddy bottom himself (Carolyn Meyer and Charles Gallenkamp, “The Mystery of the Ancient Maya,” New York, Margaret K. McElderry Books, 1995, pp. 38-39).

His tireless efforts eventually brought great discoveries to light. What he did not tell Mexican authorities was that for two decades he had been emptying the cenote of its priceless treasures and sending them back to the Peabody Museum at Harvard. When this became known in 1926, the Mexican government confiscated his estate and he returned home.