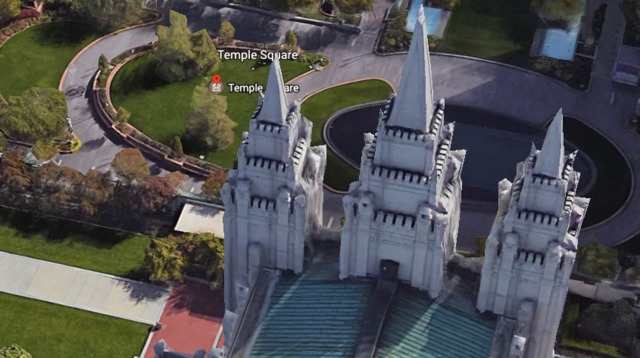 There are 10 temples that do not have an angel Moroni (including the new Paris France Temple), but the Salt Lake Temple isn't one of them.

But pictures of the Salt Lake Temple from the new Google Earth show a plain spire where the 12'5" angel Moroni should be.

@LDSLivingMag I've got a strange story for you. The new Google Earth has removed the Angel Moroni from all it's Temple Pics. Here's 3 Pics. pic.twitter.com/6U6phxKAyy— Neil C. (@Television_Boy) April 25, 2017

The pictures of the empty spire have been circulating on Twitter, though there hasn't been any explanation as of yet on Google Earth's website why the 2,000–4,000-pound statute is not represented in the photos.

If you wanted to see what the statue of the angel Moroni on the Salt Lake Temple looks like up close and in person, the Church History Museum has a full-sized replica.