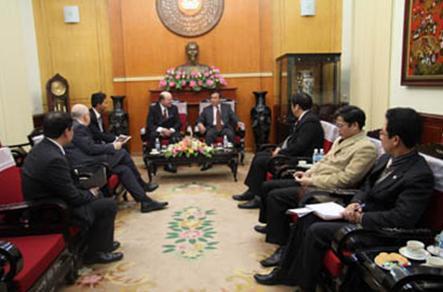 Apostle meets with leaders in Vietnam

While in Asia on assignment in February, Elder Quentin L. Cook of the Quorum of the Twelve Apostles had meetings with leading Vietnamese officials, including Mr. Vu Trong Kim, member of the Communist Party Central Committee and vice chairman and general secretary of the Central Committee of the Vietnam Fatherland Front.

Senior leaders of The Church of Jesus Christ of Latter-day Saints frequently travel across the world to manage the affairs of the Church and to minister to members. On occasion, these trips provide opportunities for Church leaders to meet with government officials and other opinion leaders.

Elder Cook said after the meeting that he had been graciously received and that the discussions were substantive. He was accompanied by Elder Carl B. Pratt of the Asia Area Presidency and Hoang Van Tung, a Church leader in Hanoi.

This Vietnamese news article and picture appeared on the Vietnamese site daidoanket.vn. An English translation of that article is below: