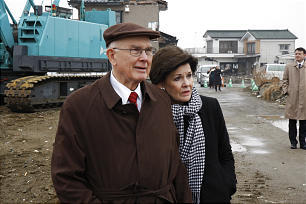 Apostle visits Saints in the Land of the Rising Sun

Elder Dallin H. Oaks of the Quorum of the Twelve and Elder Donald L. Hallstrom of the Presidency of the Seventy spent 12 days traveling in the Asia North Area during the month of February. Stops on their itinerary included the Japan cities of Fukuoka, Kumamoto, Nagasaki, Tokyo and Sendai, as well as many coastal cities in the Tohoku area devastated by the earthquake and tsunami of March 2011.